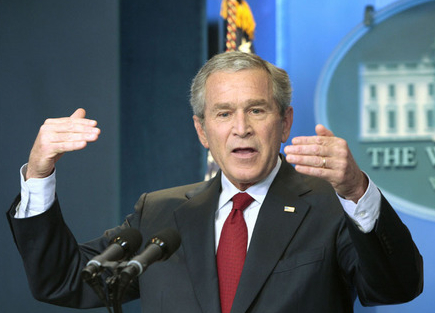 President George W Bush has authorised US military raids against militants inside Pakistan without prior approval from Islamabad, the BBC has learned.

Pakistan has said it will not allow foreign forces onto its territory.

“Pakistan would not accept foreign troops. This is not the best way to pursue the war against terror,” he [Husain Haqqani, Pakistani ambassador to the US] said.
(Source: BBC News)

Do you see how it is? If Russia attacks Georgian troops invading South Ossetia and Abkhazia, then that’s Russia being a warmonger. Dick Cheney starts foaming at the mouth:

Because, you see, the USA respects national borders. It values sovereignty.

Except when it doesn’t. As in invading Afghanistan. Then invading Iraq. And now, violating Pakistan’s borders.

Bush can personally authorise these illegal incursions into Pakistan’s sovereign territory and such is the state of the media kow-towing to the US that it doesn’t even warrant a mention on our TV news.

Imagine if Iran had sent its military into Israel this week, claiming it was tracking down terrorists the Israelis were harbouring. How much would that have been on the news? How many gravelly-voiced, terribly serious analyses would we have heard, bleating about Iranian aggression the way they bleated about Russian aggression last week?

Israel has annexed thousands of hectares of West Bank land beside the barrier it is building, according to an Israeli rights group.

The group says some settlements have seized up to two and a half times more land than they have been designated by fencing it off or through intimidation.

Under international law the settlements in the West Bank are illegal.

The International Court of Justice issued an advisory ruling in 2004 that the barrier breached international law where it is built on occupied territory and should be dismantled.
(Source: BBC News)

And what has Bush or Cheney or the rest of the gang of murderers, war criminals and consummate hypocrites we call the US government said about this?

Nope. Not a word.

It seems some nations’ borders are more sacred than others…