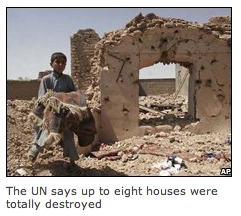 There is convincing evidence that 60 children and 30 adults were killed in a US air strike in western Afghanistan last Friday, the United Nations says.
The US originally said its planes had killed 30 militants in the attack in the province of Herat.

“Investigations by Unama found convincing evidence, based on the testimony of eyewitnesses, and others, that some 90 civilians were killed, including 60 children, 15 women and 15 men,” the UN’s Special Envoy to Afghanistan, Kai Eide, said in a statement issued on Tuesday.

“The destruction from aerial bombardment was clearly evident with some seven-eight houses having been totally destroyed and serious damage to many others.
“Local residents were able to confirm the number of casualties, including names, age and gender of the victims.”
(Source: BBC News)

I checked the TV news tonight on both ITV and BBC1 at 10pm.

The lead story on BBC1 was about Russia’s recognition of the independence of Abkahazia and South Ossetia. This was branded as warmongering by the USA and its client nation, Georgia.

No TV reporter chortled at the irony of the USA slinging around insults about occupation and UN resolutions. No reporter recalled how the USA continues to ignore the UN resolutions against Israel’s illegal occupation of Palestine, violations dating back at least forty years now.

Apparently, only the USA and its friends, like Georgia and Israel, are allowed to pick and choose which bits of international law suit their tastes.

I kept watching. Was there going to be any mention of the fact that US forces murdered 90 civilians last Friday? Sixty of them were children. Did none of those sixty children even warrant one word on our national TV news?

No. The sports news came and went. The news was over. These 90 murdered Afghans weren’t important enough.

The official UN investigation says that the US forces killed 90 innocent people. You would have thought, what with the US loving the UN so much when it criticises Russia, that they might be moved by this report. Maybe issue some kind of formal statement. Perhaps just slip it into the press conference where they were slagging-off Russia for being warmongers? Just an apology?

Because, simply put, the USA doesn’t care. It’s killed over a million Iraqis and the world has done nothing, what’s a few more dead brown children, eh? It’s not like Condoleezza Rice or George W. Bush gives a damn about human life or freedom or even liberty.

Obviously, like their counterparts in Al Qaeda, all they care about is their own power.

We live in a time where the greatest military power in the world is commanded by monsters. Their mission is to encircle the globe with a string of military bases, country after country, Poland after Georgia, until the American Empire can suck the world dry of oil, gas and every other resource it needs.

Everything in our mass media portrays the US as benevolent. Oh sure, if you actually read, you can find articles like the one I’ve quoted at the top. But that isn’t most people. Most people don’t have the time to look any further than the mainstream media. Russia coughs and there’s a flurry of indignant reports on our news programs, reporters muttering grimly about ‘Russian aggression.’

But the USA… the USA can slaughter 90 people attending a wake and it doesn’t even get mentioned. Those deaths don’t exist. Like the Jews the Nazis murdered or the disappeared innocents in Guantanamo, those people are un-people.

I’m beyond anger now. I’m simply intensely sad and horrified. This can’t be the world, this can’t be reality. I can’t get the thought of those sixty dead children out of my head. It’s wrong.