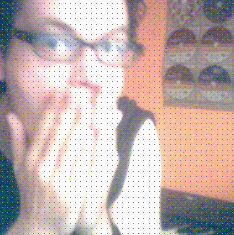 Woo! Tonight’s best new track was by Trash80, pictured above. It’s the absolutely magnificient stompalong ‘Icarus.’ But why take my word for it when you can download it (and the rest of the EP) from Trash80 himself, for FREE! Yep! Nada. Please make sure you send him some money or a book or something to thank him for his benevolence. Really, how many times have you paid for music not one zillionth as imaginative, passionate and dreamy as this?

If you’re a fan of great electronic music, be sure to check out 8 Bit Peoples for loads more free loveliness!

The best old song was ‘Je Suis Passée’ by Hard Corps. I saw them supporting Depeche Mode at the NEC just over twenty years ago. Hard Corps were simply an excellent electronic band. More on the dark side, hence the only people who seem to remember them now are old goths and me. They were produced by Martin Rushent and he gave them a fierce, pumping sound that was a lot harder than most of their contemporaries. I really don’t understand why they never broke through, I always found their music romantic and glamorous, dramatic and atmospheric. If you love any electropop / synthpop, you should check out these forgotten pioneers of the genre.