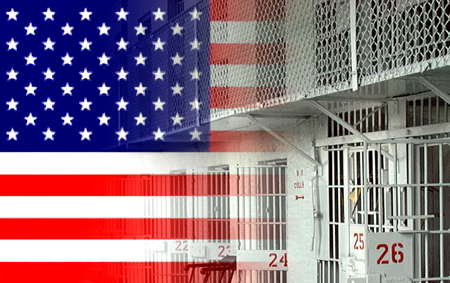 Quoting the recent report by the Pew Center on the States’ Public Safety Performance Project, Lamkey noted that for the first time in history more than 1 percent of adults in the United States — one in 99.1 persons is held in jail or prison.

As reported in the May/June issue of Correctional News, the United States leads the world in the number of inmates per capita, with 750 inmates per 100,000 residents, according to the Pew report. During 2007, the U.S. prison population increased by more than 25,000 inmates to almost 1.6 million inmates, and local jails throughout the United States held 723,131 inmates at the end of 2007.

The US prides itself in being a world leader. Now it’s the leader at imprisoning its own citizens. Yep, no other country outdoes America in locking up the population. China? Doesn’t even come close. Maybe if they were as free and democratic as America, they’d follow its example and lock up 1% of the Chinese.

But what about loonies, I hear you ask? They worry you and you’d rather not see them on the streets. Don’t worry – plenty of room:

More than 10 million adults are booked into U.S. jails each year and a recent Bureau of Justice Statistics study reported that an estimated 64 percent of local jail inmates have mental health issues.

The suicide rate among mentally ill inmates is double the rate of the general population, and the study reported that significant amounts of mentally ill jail inmates do not receive treatment during incarceration, while only 17 percent receive post-release treatment.
(Source: Correctional News)

Yes, that’s what a civilised country, the richest country in the world, don’t forget, does with its mentally ill citizens – bangs ’em up! With any luck, they’ll kill themselves and therefore not drain society’s resources any further.

Because there’s no money for health care, oh no! What are you, some kind of COMMIE?? They need that money to bomb civilians in Iraq. America can afford to spend $3 trillion on killing innocent people in a far-off land but it can’t afford to take care of its least able citizens.

I think I may get into the prison business, after all, look at the way they’re throwing money at it:

Since 1987, collective spending on state corrections systems has increased from less than $11 billion to more than $49 billion in fiscal year 2007.
(Source: Correctional News)

That sounds like a nice profit margin. But what about the prisoners? How am I going to make money if jail works? HAH! Don’t worry, it doesn’t:

However, approximately 67 percent of state inmates return to prison within three years of release, according to the Bureau of Justice Statistics.
(Source: Correctional News)

EXCELLENT! Truly, America is the land of business opportunity! The free market is wonderful! God save America!

If you manufacture weapons or jail cells, this is the place for you!

Just one problem… can we circulate a memo on this ‘Land Of The Free’ business? It’s a bit embarassing.