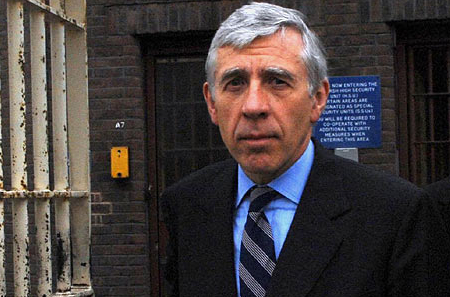 The Labour peer, who was attorney general when Tony Blair made a failed bid to increase the detention limit to 90 days, said: “There can be no mistake that extending the period suspects can be held without charge is a very serious incursion on our fundamental freedoms.”
(Source: BBC News)

So, we’re being sold out by New Labour MPs yet again?

I wonder how these spineless “rebels” are being won over? No doubt with a series of threats, bribes and promises of cushy positions. The same way Blair was bought into the disastrous illegal invasion of Iraq by the USA.

Straw protests that these new laws will only be saved for the very worst situations. They won’t be abused. Oh no.

And we all know that must be true, since politicians never lie.

Never mind that UK police are already running round shooting innocent people to death, invading innocent people’s houses and attacking them and otherwise covering up their crimes in order to guarantee our freedom from tyranny.

Hold on – this freedom from tyranny is starting to feel a whole lot like tyranny to me.

Better watch what I say or I’ll get branded a terrorist by our lords and masters and disappear with no trial and no due legal process. You know, like what happens to dissidents in China.

And, if New Labour get their way with this new law, Britain.

The above made me smile…