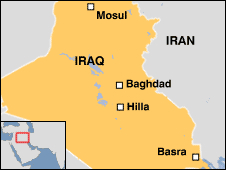 An air strike in the southern Iraqi city of Basra has destroyed a house and killed at least one occupant.

The US military said a militant died, but would not confirm reports from Iraqi sources that up to six civilians may also have been killed.

Another house full of innocent civilians murdered by the US military.

And yet most people still think the majority of the killing in Iraq is a result of “sectarian” clashes.

Every day, this kind of random murder by the invading forces in Iraq takes place, it mostly goes un-reported. Whereas, if China had carried out an air strike on a Buddhist temple, killing seven monks, you can bet that would be top international news now. Oh yes.