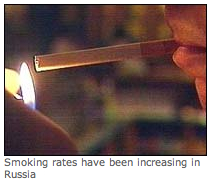 Smoking rates have more than doubled in Russia since the collapse of the Soviet Union, researchers say.

The Bath University-led team said “aggressive targeting” of women by tobacco firms was behind the rise.

Welcome to the free world! Welcome to democracy! Welcome to being brainwashed by teams of expert advertisers so you actually pay money to give yourself cancer!

Ain’t capitalism wonderful? Surely, this is the kind of carey-sharey, warm’n’fuzzy ‘creative capitalism’ that Bill Gates was promoting this week. What’s more ‘creative’ than people dying in agony of lung cancer? On my recent DJing trip, I got to see the finished St. Pancras International train station. And, though some units are still empty, I love the feel of it. The old struts mixed with the new, swish bits makes for a unique kind of retro-futurism. Not quite cyberpunk, not steampunk. Errr… Pancraspunk? 🙂 Woohoo! I had a fucking hoot DJing at How Does It Feel To Be Loved? last Saturday. It was great to be able to play some rather obscure new indie stuff and have a crowd of people singing along! The only regret I have is that I didn’t manage to fit in as many new bands as I wanted to.

A great night, thanks to all the kids who came along, danced and sang! 😀 Click here for a gallery of pics from the night.

And on the night, youse hoird:

Agent Simple – Make A Right At Jordfallsmotet
Vapnet – Tjernobyl
McCarthy – Write To Your MP Today
Spearmint – Sweeping The Nation
Even As We Speak – Falling Down The Stairs
Beat Happening – Hot Chocolate Boy
The Mary Onettes – Void
Super Furry Animals – God! Show Me Magic
Bristols – Who Does She Think She Is
Sibiria – Hat Tillbaks
My Bloody Valentine – Sueisfine
The Magnetic Fields – Famous
Their Hearts Were Full Of Spring – A Question Of Trust
The Field Mice – If You Need Someone
Black Flag – Louie Louie
Beirut – Elephant Gun
Orange Juice – What Presence-!
Aberfeldy – Hypnotised
Cure – Just Like Heaven
De La Soul – Eye Know
Bobby Byrd – I Know You Got Soul
The Hidden Cameras – Ban Marriage
Jens Lekman – Your Arms Around Me
Cats On Fire – Draw In The Reins
The Brilliant Corners – Delilah Sands
Felt – I Will Die With My Head In Flames
Camera Obscura – Keep It Clean
Death Cab For Cutie – The Sound Of Settling
Deerhoof – Milkman
Saves The Day – At Your Funeral 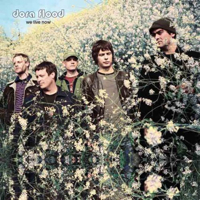 Thanks for putting my band’s (dora flood) album, we live now, in your top 50. I do remember white town’s hit your woman. I remember someone saying it sold out faster than anything before it. I also remember elektra passing on signing us around the same time but after seeing your emi blog that was probably a blessing. anyway, if you want to hear the rest of our back catalogue, it is avaliable for free download at www.doraflood.com

And you can read why I reckon Dora Flood made one of the best albums of ’07 by clicking here.

And I suggest you go and grab all their other stuff too, since they’re kind enough to share it with you for the handsome price of FREE. Wow! What an ace night! I’m knackered and my legs ache from dancing. 😀 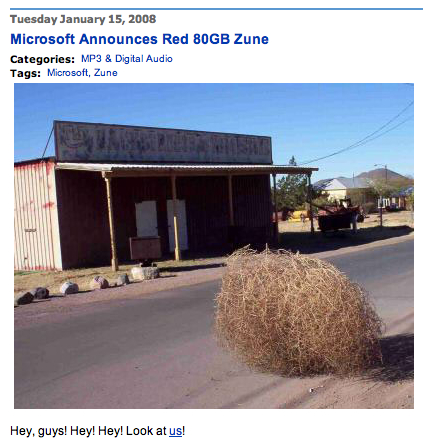 So I couldn’t help but laugh and also cry a bit for poor old Microsoft when I saw the above post on Gearlog.

This is beyond schadenfreude… 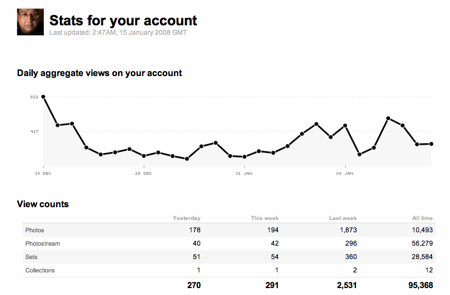 Yaaay! More pointless stats! Now I can see stats about my Flickr photos! 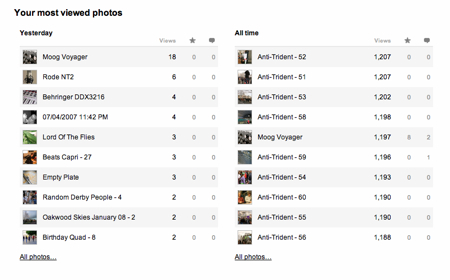 There are some quite surprising results – I’m getting a lot of referrals from MySpace. I’m guessing that’s avatar pics I’ve taken of peeps? Also, far more from Flickr itself than I would have thought. Hmmmm… verrrry interesting.

Oooh, so many facts and figures. With graphs! 😀 If you love used teabags and greasy plates, you’re going to love this set. Clicky the piccy! Click above to see some shots of assorted gear in my studio.