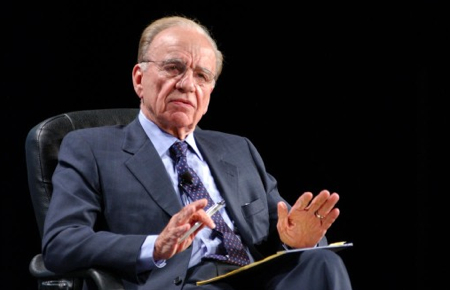 Darth Murdoch, giving another speech on why Iraqis need to be slaughtered…

MySpace is running out of breath, while Bebo and Facebook are fast catching up. That’s the message from the latest figures on social networking in Britain.

MySpace has long been the leading site for young networkers who want to run their social lives online.

But research firm Nielsen/NetRatings says May saw a drop in UK traffic to MySpace, while Bebo and Facebook continued to attract new users.

Facebook, once largely confined to American colleges, has grown its audience by more than 500% in the last six months – making it more popular in Britain than in the US.

Rupert Murdoch, who bought MySpace in 2005, has already expressed concern about the growth of Facebook. His executives will now be under even more pressure to find ways of making MySpace fashionable again.
(Source: BBC News)

Oh, poor, poor Rupey-wupey! It’s not enough that his warmongering has contributed to the death of 1.2+ million innocent Iraqis, he won’t be happy till he’s got every emo kid in the world on his shitty social website, moaning that they’re bored in interminable bulletin updates.

Look, Facebook is obviously not a cuddly charity. It spies on users, the apps are a pulsating bag of shite and every day brings more news about further intrusions.

At least it’s not owned by Murdoch.

Until Facebook takes part in killing 1.2+ million people, I think I’ll take it over MurdochSpace.