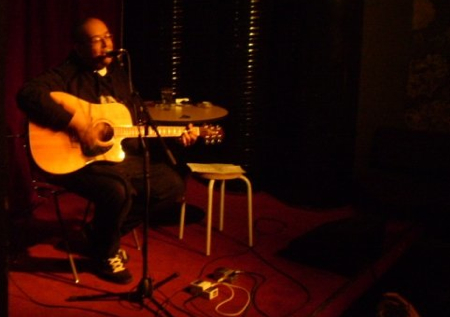 And it was excellent!

The gig was organised by Cosy Den (thank you, Mattias!) and I again had the privilege of playing with the urbane and debonair Erik Halldén: Landet is a wonderfully intimate and ..er.. cosy venue but it’s also got great lights and a PA that would shame many a larger club. It’s such a joy to play and actually be able to hear oneself (and thanks also to Gaz for doing a great job on the sound again).

I loved being able to lock around the people in the audience, from face to face and sing directly to them. I guess I’m just not rock’n’roll – my favourite type of gig is exactly this kind of small, personal affair. The first half of my set was acoustic, just me warbling over my hamfisted guitarrings. The second half was similar but with the addition of electronic backing tracks. I wouldn’t have been surprised if the whole thing had fallen as flat as a pancake! But the audience… oh, what lovely people, as attentive and polite as they were windswept and gorgeous. I really couldn’t imagine a British audience being so charming and gracious, sadly.

Afterwards, I got the best reaction any songwriter could ask for: two beautiful ladies separately approached me and said how my set had made them feel a bit emotional and tearful. They understood exactly what my music is about. Yes! I am the king of indiegothelectrofolk! 😀

And I had even more flattery in the course of the week that followed while I was still in Stockholm. I kept bumping into people who’d been at the gig and searched me out at gigs and clubs to tell me how much they’d enjoyed the set. As if I wasn’t enough of a rampaging bighead already! (Coming back to my normal Derby life has been somewhat of a shock to the system after all that…)

This was another dream gig for me and I’m not surprised it happened in Sweden. There’s a spirit, a pure passion for music there that doesn’t seem present on these shores where everything seems far more cliquey and “cool.” And I’m entirely the wrong size, colour and age to be cool, after all! I just can’t fit into them skinny trousers! 😉

To everyone who was at Landet, thank you for listening and all the sweet things you said after the gig. Hopefully, I’ll be seeing you again, soon!

And next on the gig trail…