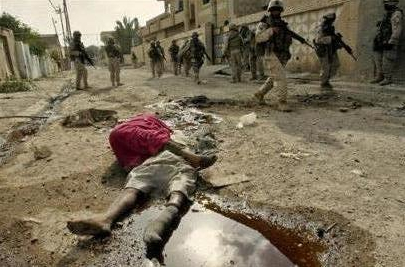 Some happy, joyful Iraqis, liberated by the US military in Fallujah.

The pattern for reporting on such attacks has remained the same from the early years of the occupation to today. Take a helicopter attack on October 23rd of this year near the village of Djila, north of Samarra. The U.S. military claimed it had killed 11 among “a group of men planting a roadside bomb.” Only later did a military spokesperson acknowledge that at least six of the dead were civilians. Local residents claimed that those killed were farmers, that there were children among them, and that the number of dead was greater than 11.
(Source: AlterNet)

Another excellent article from AlterNet, I suggest you read it all. Perhaps if more people read articles like these, they wouldn’t believe that the deaths in Iraq were mainly due to “sectarian clashes.”

Remember, car bombers are beginners at inflicting death and carnage compared to the US military.