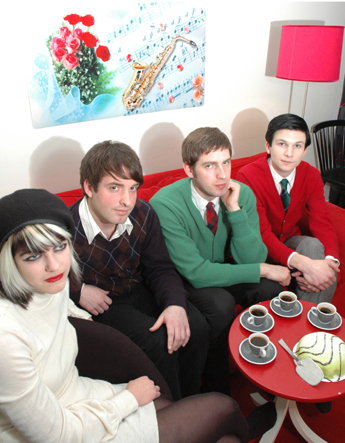 I shall shortly be making pilgrimage to the current home of indiepop, Sweden (well, it shares the title with Finland), so I thought I’d share yet another great Swedish pop band with you. And that band is Elenette.

When kalle berglund and mattias hagegård moved to sthlm the fall 2003, they both broke up from several old projects and wanted to start something new, based on drum-machine, bass and synthesizers. but not much happened, so kalle recorded his own demo instead with the same idea in mind. it was released under the name elenette in summer 2004, and was called “kärlekskomplex”. many people liked the sound so kalle started writing and recording a new ep. this was to be called “männen i mitt liv” and was released at elenettes first live-show ever in february 2005. the line-up was kalle solo, playing double synthesizers and singing.

(If you can read Swedish, have a look here.)

There are echoes of many great bands in Elenette: Pulp, Aha, The Specials. But, like all the best pop groups, they take those influences and twist them, making something unique and peculiarly their own. I love the combination of ’80s reverbiness, ’90s dry drum machines and timeless swinging guitars.

I was put onto Elenette by my friends Mattias and Tommy. Let’s face it, if these two pop pickers love a band, there’s a high probability they’re going to be wonderful. And, hullo! Elenette are.

They have everything that’s sorely missing from NME haircut indie: grace, humour, MELODIES and, most of all, they’re actually fun to listen to.

But don’t take my word for it. Check ’em out with some free mp3s they’ve stuck up:

You can stream those or download them to listen to later.

I’d advise you to grab them now so you can be boastfully smug when the inevitable global chart domination of Elenette ensues. 😀