I bought my iPhone on the UK release day, exactly a week ago. Since then, I’ve been itching to post up a review but I deliberately waited till I’d used it for a week. I’ve seen plenty of scrappy, ‘Ooh, I’ve touched one, it’s pretty!’-type reviews and I didn’t want to add another to that canon.

In the past week I’ve taken my iPhone out clubbing three times, shopping five times, driving, taking pics and all the other mundane, day-to-day stuff that truly tests a phone’s mettle. To save you skipping to the end of this ramble, here’s the one-sentence review:

I love it, despite some serious omissions and flaws. Call Quality And Utility
This is the bread-and-butter phoneness, get this wrong and a phone is completely pointless, no matter what else it does. Well, the iPhone gets it right. The quality of audio on calls is extremely clear and the people I phoned said my voice was similarly well-rendered. I’ve heard no spurious whines, crackles or gurgly compression artifacts. Making calls is beautifully simple. Invoking the keypad is quick, the touchscreen tracks number taps very accurately and the display of the number you’re dialling outclasses any other phone I’ve seen or used. You can do a lightning-fast lookup in the Contacts section, the list of made / missed calls or the easily-configured Favourites. Really, the basic phone utility beats every other mobile phone.

Texting
Texting is more of a mixed bag on the iPhone. The pluses: the text correction and touch keyboard enable very quick composition, far faster than I’ve ever managed on my P990i or any conventional number pad phone. The texts are also threaded as conversations, making it much easier to work out what the hell’s going on when you get a cryptic SMS at 4am.

No smilies? That makes me 🙁

I love smilies. For short text forms like SMS messages or emails, they can help paper over possible misunderstandings. The iPhone will display the colon dash bracket, of course, but (like the similarly hobbled Nokia N95), it stubbornly refuses to automagically replace that code with a little pic like WordPress does here -> 🙂

Seeing as the text looks very like iChat, this is a strange omission. And while we’re here, it would be lovely if the threaded SMS messages also displayed little avatars filched from their Contacts details. Come on, smilies and avatars – they’re hardly rocket science, are they?

Even worse than that there is no group texting.

Yep. You read that right. So, even though you can have groups of Contacts (transferred seamlessly from Address Book on your Mac), you can’t text them all at once. So… say I’m heading into town and I want to text Vladimir, Lev Davidovich and Jaan to meet me… well, I can’t just send one text to my Contacts group ‘Commies,’ I have to type and send it three separate times. Oh, and before you ask why I don’t cut-and-paste the text, let me drop this other gem: the iPhone has no cut-and-paste. Nope. See an interesting tidbit when you’re browsing round the net? Well, all you can do is bookmark it. There’s no way to copy the text and I haven’t even found a way to email the page to someone else. *sigh*

And there’s no MMS. So you can’t text a pic to anyone. Or receive one via text either. *double sigh*

Come on, Apple! Fix these silly frigs in an update!

The Internet, Email And Other Apps Phew… after all that irksomeness, let’s move on to the glowing, sweet meadow that is the net on the iPhone. The mini-Safari browser trounces any other browser on a mobile phone. It’s snappy, intuitive and very stable. If you see a pic or section of a page you like, simply double-tap it and Safari intelligently zooms in. And then there’s the iPhone’s cutest trick – turn it sideways and it turns the content sideways. So, you can see web pages in a very natural, easy-to-read way. Already, some sites are optimised for the iPhone and they look fabulous. I’d argue that Facebook is far more pleasing and clean to use on an iPhone than it is on a “proper” computer. As a UK user, I’m also very smug that I get free access to wi-fi wherever there’s a Cloud access point. On first login, The Cloud check your phone number and after that, the connection is totally invisible and background. This is the way wi-fi should be: the iPhone intelligently switches wi-fi hosts, it doesn’t keep bleeping and burping and bugging you like the P990i does. The Mail app is also simple, clean and fast. It’s a joy to my tired eyes after trying to read and respond to email on so many other portable devices. The hidden treat is that the iPhone’s Mail app supports IMAP so you can sync your email with your IMAP email host, a step forwards from simply having a peer inside the mailbox via POP3. 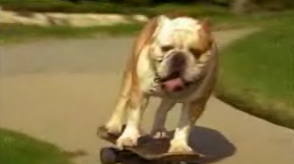 All that businessy kind of stuff pales into the distant haze when you realise that with the YouTube app, you can finally show random strangers in the street the skateboarding bulldog. What other phone renders the bulldog’s beatific grin so brilliantly as he kicks down the road? Genius.

Perhaps this is why there’s no MMS on the iPhone? Maybe Apple have decided, like that bulldog, to push things forward, grinning like loons. Why send MMS messages when you can grab a pic and email it? MMS has always been rather iffy on UK networks anyway. I’ve often tried to send pics and all my friends got was a crappy link to a webpage via their phone network.

Which brings me neatly to…

Camera
Phone cameras started off as the icing on mobile cakes. But they’ve since become pretty indispensable. I used to be the only nutjob taking pics in clubs in 2003 – now everyone’s whipping out their phones and getting pictures of their friends falling down the stairs.

So it pains me that the iPhone camera is… not great. Don’t get me wrong, it’s not shite either. It’s just very… bleah. The two megapixels is rather mean by today’s standards (particularly at the lofty price point of the iPhone) and there’s no flash. Or video mode. What… yeah, another Apple bizarre omission.

Here are some pics from the iPhone: All of these are un-tweaked, straight out of the phone. So, not awful, like I said. But not stunning, either. Now take a look at this pic: Can you see the unusual striations at the bottom of the pic? Here’s a closeup:

What’s all that about, Apple, eh? Shadders? On me langs? Now we’re back on home ground for Apple. I had an Archos MP3 jukebox way before the iPod came out (well, a year). It was a clumsy, temperamental beast with a user interface that Bletchley Park would find hard to understand. Then Apple came out with the iPod and… well, how many people do you know that have iPods? How many have Archos or Creative mp3 players? Exactly.

The iPhone’s iPod functionality is the pinnacle of that mountain of experience. Cover flow is a joy, now it’s on a screen that’s actually large enough to see. Finding artists or albums or genres or composers is fun and simple. The audio quality is lovely, once you ditch the piece-of-crap earbuds Apple ship. Since I, unlike Apple, like music with bass in it, I wanted to use my excellent Senheiser PX100 headphones. But the iPhone sports a 3.5mm socket with an idiosyncratically narrow … er, opening. I could have spent eight quid on an adapter. Instead, I just shaved the plastic off the end around the jack. Slightly ugly but cheap and I could finally enjoy quality audio from my iPhone.

When you’re listening to music and a call or text comes in, the iPhone acts like a robo-butler, discreetly turning down your bangin’ grime and dinging or ringing. Once you’ve finished the call, the music fades back up. Smooooov.

So, all good in the music department?

There are many Bluetooth stereo headsets out there. They’ve even got built-in mics and volume/skip controls. Can I use one with my iPhone for hands-free music and phone joy?

The iPhone won’t do it. You can use your swanky headset for phonecalls, yep. But music? No. They’ve deliberately hobbled it so you cannot select Bluetooth as an audio destination. For that matter, you can’t Bluetooth files to and from the iPhone. Or text via Bluetooth (oh yes, that useful little button has been excised from Address Book). In short, they’ve cut the arms and legs off Bluetooth. The iPhone doesn’t have Bluetooth, it has Bluestump.

Lofty Conclusions
You’re asking me, after all those faults, how can I still love the iPhone?

Despite the no smilies, no group texting, no cut and paste, no video capture, no MMS, irritating jack socket and Bluestump, the iPhone is still the best mobile phone I have ever used. I’ve had Nokias and Sony Ericssons, LGs and Sagems. They’ve all performed less well than my flawed iPhone.

All of those phones and every current phone on the market are rendered obsolete by the iPhone. It’s a vision of the future, it’s the dawn of ubiquitous, persistent mobile computing, it’s the death-knell of the pub quiz (unless it’s held in a Faraday cage), it’s the first true PDA, it’s the first Digital Companion, it’s the granny of all future personal computers.

The seamless integration of wi-fi bulldozes the competition. As someone who’s spent aeons puzzling over the wi-fi preferences of Sony Ericssons, the iPhone’s internet access is sharp, clear relief. Whether it’s finding directions on the Google Maps app or email or buying songs on iTunes, you forget you’re using a phone. It’s that easy. I find that I send more texts because it’s more fun to text. Look at that pic above: even setting alarms is fun on the iPhone! I take silly pics and then email them to people. After all, their email addresses are in my Contacts, synced over from my Mac. Everything clicks together.

The iPhone is the best personal communication device around. Yes, the many niggles I’ve highlighted are all annoying but the package as a whole easily outclasses every other phone.

When I’m walking around town now, I see people using non-iPhones. I see them squinting at miniscule screens, cracking their thumb knuckles texting in an area less than a square inch, I see them guffawing like gibbons at their odious comedy ringtones.

And it all seems very quaint to me. Like watching cavemen bang rocks together.

Then my iPhone rings and I’m back to the future!