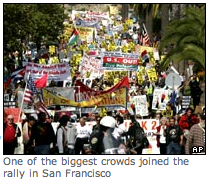 Tens of thousands of people have taken part in demonstrations against the war in Iraq in cities across the US.

Rallies took place in a dozen cities, with the biggest crowds gathering in New York, Chicago and San Francisco.

They were timed to coincide with the fifth anniversary of a vote by the US Senate to authorise the Iraq invasion.

Those taking part, who included relatives of servicemen fighting in Iraq, urged the US congress to cut off funding for the war.

An estimated 10,000 people joined a march in Chicago and in San Francisco there was an even greater turnout.
(Source: BBC News)

It’s pretty easy to be an antiwar protestor in the UK. Even though we are protesting against the actions of our government, we do so in a cultural background that’s far more left-wing than that of the US. Here, we don’t have the same level of ‘my country, right or wrong’ as that which seems the norm in America. Over there, simply to exercise your democratic right to protest can get you labelled as “un-American” by the neo-Nazis who control much of the media discourse.

So, my admiration goes out to all the thousands upon thousands of Americans who marched in these latest protests. Well done, all of you. It takes real courage to stand up for peace and freedom in a media culture so skewed towards war and profit, so biased against the voice of the people.

This is my fave bit from the article:

One of the national co-ordinators of the protests, Leslie Kielsen, told Reuters that the “half a trillion” dollars spent on the war was money that could have been used for education, social housing and to feed the hungry.
(Source: BBC News)