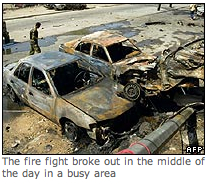 Officials are investigating a shooting incident in Baghdad in which at least eight civilians were reported killed by private US security contractors.

The private security workers, who were employed by the US State Department, apparently opened fire after their convoy came under attack on Sunday.

At least 13 people were also injured in the shooting in a busy part of Baghdad.

Another witness, Muhammad Hussein, saw his brother killed in the gunfight.

“I was driving behind my brother’s car and suddenly there was an explosion and firing. I tried to figure out what was happening when I saw a black convoy ahead of us,” he told the AFP news agency.

“Soon after I saw my brother slump in the car. I dragged him out of the car and tried to hide to avoid the firing but realised that he had been shot in the chest and was already dead,” he said.

They are often heavily armed, but critics say some are not properly trained – even trigger-happy – and are not accountable except to their employers.
(Source: BBC News)

The US is already wringing its hands and Rice is squeezing out those crocodile tears about these murders. As if she gives a damn: what’s eight more lives compared to the 655,000 – 1.2 million the illegal US invasion has already claimed?

Here’s some more about those defenders of freedom and democracy, Blackwater:

Backwater — founded by ultra-right-wing Christian conservatives — hires Pinochet-era Chilean war-criminals, ex-law-enforcement types and former military, and others to serve in Iraq, Afghanistan — and in America. They can and do murder civilians with impunity, they line their pockets with cost-plus multi-billion-dollar military expenditures…
(Source: Boing Boing)

The Iraq government has revoked Blackwater’s operations licences. A full investigation will be held. The most that will happen is that a few hands will be slapped before being allowed to dip once more into American taxpayers’ funds.

The Blackwater chiefs will remain sanugine, just as the ultimate villains behind these deaths, the neo-Nazis who have infiltrated the US government, will sleep soundly tonight.