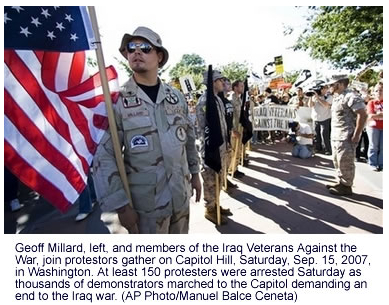 WASHINGTON — Thousands of protesters marched Saturday from the White House to the Capitol to demand an end to the Iraq war, leading to the arrests of at least 150 people.

Many of the protesters were arrested without a struggle after they jumped over a barricade near the base of the Capitol. But some grew angry as police attempted to push them back using large black shields and a chemical spray. Protesters responded by throwing signs and chanting: “Shame on you.”

Before arriving at the Capitol lawn, the demonstrators marched on Pennsylvania Avenue holding banners and signs and saying, “What do we want? Troops out. When do we want it? Now.”

At the Capitol lawn, some protesters lay down with signs on top of their bodies to represent soldiers killed in Iraq.
(Source: CommonDreams.org)

The world is stirring. Mass antiwar protests this week in Germany and, now, on the lawn of the White House.

This also shows why parliamentary democracy isn’t true democracy: over two million Britons marched to stop Butcher Blair plunging this country into an illegal invasion of Iraq. Did he care? No. Our voices were ridiculed and marginalised, in the bourgeois media and the dinner parties of the ruling classes.

Four years later, the latest survey estimates over one million Iraqis dead. A grand adventure, a massive slaughter we were party to, urged on by Blair’s lies about WMDs being poised and ready. We were “45 minutes” from attack, he lied.

At the US antiwar protest, there was apparently a tiny counter-protest. This consisted of the usual neo-Nazi nutters, demanding that anti-war Americans leave the country. This moronic argument always amazes me: what gives these fools the right to claim America? Where is it written that you can only be an American if you’re a right-wing, homophobic, woman-hating, KKK-loving arsehole?

Here’s some of my favourite Americans:

The above are true, all-American heroes and heroines.

Just like the 150 Americans arrested for protesting against the insane evil of the Iraq occupation.