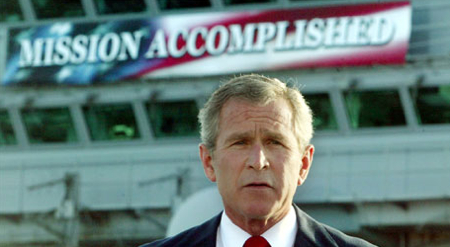 A startling new household survey of Iraqis released last week claims as many as 1.2 million people may have died because of the conflict in Iraq – apparently lending weight to a 2006 survey in the Lancet that reported similarly high levels.

More than one million deaths were already being suggested by anti-war campaigners, but such high counts have consistently been rejected by US and UK officials. The estimates, extrapolated from a sample of 1,461 adults around the country, were collected by a British polling agency, ORB, which asked Iraqis how many people living in their household had died as a result of the violence rather than from natural causes.

Previous estimates, most prominently collected by the Johns Hopkins Bloomberg School of Public Health, reported in Lancet in October 2006, suggested almost half this number, 654,965, as a likely figure in a possible range of 390,000 to 940,000.

The Lancet survey was criticised by some experts and rubbished by George Bush and British officials. In private, however, the Ministry of Defence’s chief scientific adviser Sir Roy Anderson described it as ‘close to best practice’.
(Source: The Observer)

I’m sickened by this new survey. But not surprised. After all, the Lancet study, the only scientific appraisal of Iraq fatalities so far, reported 655,000 dead almost a year ago. And Iraq has hardly been a land of milk and honey since then, despite what Bush, Blair, Brown and the rest of the war criminals have been claiming.

There is nothing I can say about this evil. I know that money I’ve paid in taxes has gone towards killing innocent Iraqis. It makes me fucking sick.

I’m going to this: 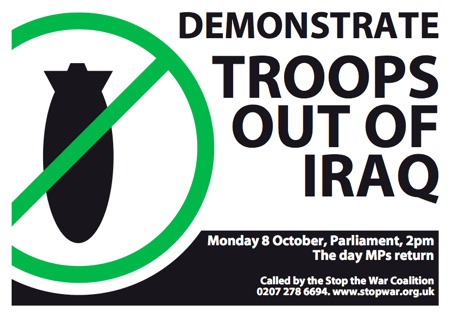 If you feel powerless, if this latest survey makes you feel as sick and angry as I do, then go on this demo and show the government, show the world, that Britons wish to have no further part in this great evil.