Apple today unveiled Logic Studio, a comprehensive suite of professional tools that gives musicians everything they need to create, produce and perform in the studio and on the stage for just £319 (inc VAT).

Or, I can buy the upgrade for a mere £129 – that’ s $258. $258 for an upgrade which doesn’t address any of the issues Logic users have been moaning about for goddamn years and which appears to be merely a load of cosmetic airbrushing.

Logic remains a magnificent, professional and reasonably-priced piece of software… 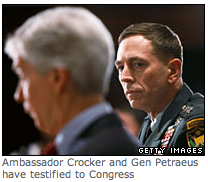 Senior US officials have singled out Iran for criticism, a day after giving a progress report on security in Iraq.

Gen David Petraeus, top US commander in Iraq, and US envoy to Baghdad Ryan Crocker both cited evidence of Iranian involvement in attacks on US troops.
(Source: BBC News)

The USA invents evidence for WMDs and uses these lies to justify its illegal invasion of Iraq. This evil is backed by our own Butcher Blair.

No WMDs are found. The USA doesn’t care. It doesn’t leave Iraq… not while that tasty oil is there.

Then the USA occupation goes on to torture the citizens it was meant to be liberating, seize their oil and install a puppet government.

Oh, and kill 655,000+ civilians. The US military kills around 300 Iraqis a day. (Those deaths are NOT the result of “insurgent” terrorism.)

And now, the USA claims that Iran is a “troublesome neighbour?”