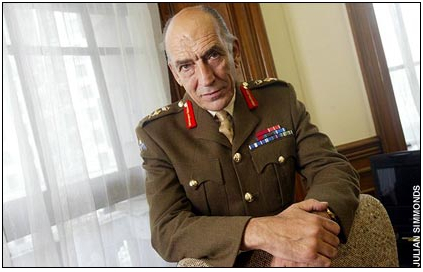 The head of the British army during the Iraq invasion has said US post-war policy was “intellectually bankrupt”.

In a Daily Telegraph interview, former chief of the general staff, Gen Sir Mike Jackson, added that US strategy had been “short-sighted”.

He said former US defence secretary Donald Rumsfeld was “one of the most responsible for the current situation”.

Sir Mike told the Daily Telegraph that Mr Rumsfeld’s claim that US forces “don’t do nation-building” was “nonsensical”.

He criticised the decision to hand control of planning the administration of Iraq after the war to the Pentagon.

He also described the disbanding of the Iraqi army and security forces after the overthrow of Saddam Hussein as “very short-sighted”.

“We should have kept the Iraqi security services in being and put them under the command of the coalition,” he said.
(Source: BBC News)

So, yet another indictment of the US in Iraq from someone who isn’t a filthy commie like me. From someone who is as establishment as you can get, who was the head of the British army when we illegally invaded Iraq.

If you read the article, his opinion is backed-up both by a leading Liberal Democrat and even a Tory.

But from the Labour benches…. nothing.

This is why I’m still anti-New Labour. As far as I’m concerned, it’s still a party of war criminals and liars, heaping cant upon their crimes. The new leader is a ruse, Brown is no different to Blair. He’s just a different wrapper around the same old shit.

Here’s what you can do about it.