You know, I try not to live my life as a ball of anger. It’s not healthy, for a start. And it’s pretty depressing.

However, the news from the last few days has just kept getting worse and worse. Every day seems to drop some new horror in my lap, like the oppression of the Burmese dissidents, the hijacking of that story by Bush, the machinations behind the invasion of Iraq… and today, John Bolton inciting murder at the Tory conference.

I have to write about all this. I don’t really want to. It mostly leaves me in tears of frustration. But I can’t ignore it, can’t switch it off. I can’t ignore the fact that my government has taken money from me in taxes and used that to illegally invade Iraq. To aid the US government in its international program of torture and murder.

So… click the vid above. Like me, take a deep breath and look at their silly, cute little faces. 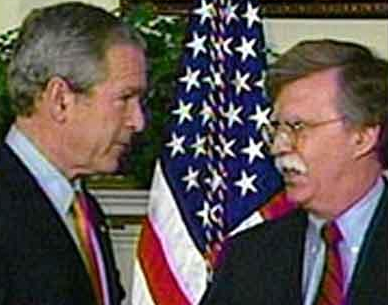 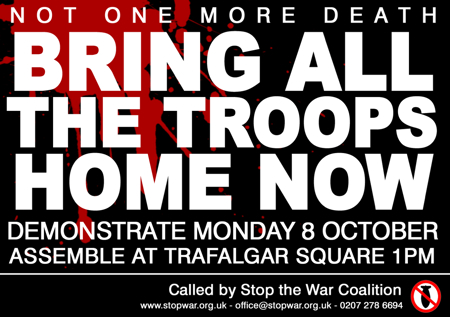 MADRID – US President George W. Bush threatened nations with retaliation if they did not vote for a UN resolution backing the Iraq war, according to a transcript published Wednesday of a conversation he had with former Spanish prime minister Jose Maria Aznar.

In the transcript of a meeting on February 22, 2003 — a month before the US-led invasion of Iraq — published in the El Pais daily, Bush tells Aznar that nations like Mexico, Angola, Chile and Cameroon must know that the security of the United States is at stake.

He says during the meeting on his ranch in Texas that Angola stood to lose financial aid while Chile could see a free trade agreement held up in the US Senate if they did not back the resolution.
(Source: AlterNet)

More sterling work from the saviour of world peace and scourge of tyrants.

US President George W Bush has led international condemnation of Burma after more people were killed in its crackdown on popular protests.

The US imposed sanctions targeting Burma’s military leaders and called on China, one of Burma’s closest partners, to put more pressure on the country.

Three hundred Iraqis every day die as the result of the US occupation. The US kills 655,000 – 1.2 million Iraqis and is the saviour of the free world, protector of democracy and ultimate arbiter or morality.

I’m sooo glad that we have Bush around to help us with our international outlook. I’m surprised he still has enough free time to order the deaths of thousands more Iraqis in between giving Burma and Iran a damn good telling-off.

Only the vicious murders committed by nations that aren’t our friends count. Our murders are good murders!

In the next few days, you will be deluged with stories about how evil Burma is, every politician in the US and UK will spew forth worried platitudes about freedom and dictatorships. Here’s some now:

Michael Moore, the Liberal Democrat foreign affairs spokesman, said: “The ruling junta in Burma is one of the most barbaric regimes in the world. Given the heinous crimes and human rights abuses that it continues to commit, it is indefensible for companies to do business with it. Those that do should be named and shamed.”
(Source: The Indepdendent)

Really? If that logic holds true, why are we not boycotting the US and urging sanctions on that barbaric regime? The USA tortures political prisoners, its military routinely shoots unarmed civilians, the USA ruthlessly suppresses dissenters in Iraq and re-labels them “insurgents.” This all sounds very similar to how the Burmese regime behaves, doesn’t it? Apart from a few differences: how many countries has Burma invaded lately? How many millions of civilians have Burmese troops killed?

Not one of these politicians will tackle the greatest evil in current world affairs: the illegal occupation of Iraq.

Hundreds are murdered every day in Iraq, mostly by the US military. Does this even make our headlines any more? Does anyone in the Western media care?

Of course, the government of Burma is a vicious, evil regime. I look forward to the day when the monsters behind it are behind bars.

But the Burmese government is a mere beginner at evil compared to George W. Bush’s. Ahhh… what a great night out! My legs are sore for dancing and I think we saw Seany’s silver jubilee in with style. Long may she reign! Click the pic for some snaps of graffiti near Markeaton Brook.