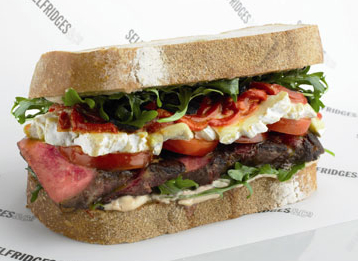 The killer sandwich above later went on to slaughter the entire village Chorlton Krakenspoke, pop. 536.

Pre-packed sandwiches may contain as much salt as several bags of crisps, a study suggests.

The health lobby group Cash looked at 140 sandwiches on sale and found over 40% had 2g or more of salt – or a third of an adult’s recommended daily intake.

The “All Day Breakfast” variety were the worst offenders, but cheese and ham as well as chicken salad also featured.
(Source: BBC News)

Whaaaat? You mean bacon sandwiches have got salt in them? Bacon is salty?

Stop the fucking presses! This is a national health emergency!

In other shock news:

CIGGIES CAUSE SHADDERS ON YER LAHNGS!

EAT TOO MUCH AND DO TOO LITTLE AND YOU WILL BECOME A FAT FUCK!

This has been a Bzangy Public Service Announcement.