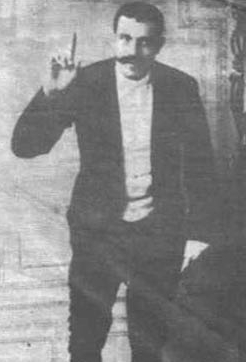 Last night was the first night I’ve been out clubbing in smoke-free England.

AND IT WAS GREAT!

I cannot tell you how lovely it was not to be choked by the fumes of people wafting fags about. And this morning, unlike every other time I’ve been out clubbing in the last 25 years, my clothes and self didn’t stink of stale cigarettes.

The only downside is that the Blue Note was guest to some of the most horrendous flatulence witnessed since Le Pétomane‘s last world tour.* The stench on the dance floor was so intense that I was rendered dizzy and palsied by the egregious, hirsute odour.

Indeed, the fart and body odour excuse is one often trotted out by smokers. “But once they ban MY FREEDOM TO GIVE NON-SMOKERS CANCER, all the pubs and clubs will stink of farts and BO! What about that then, eh, you anti-smoking fascists! EH? *cough* *splutter* *thrombosis*”

But, as far as I’m aware, there have been no scientific studies linking smelling farts or body odour to cancer. So, on the whole, I can cope with the occasional farty area rather than die in agony while my body is ripped apart by mutant cells.