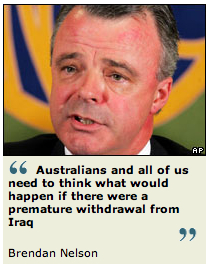 Australian Defence Minister Brendan Nelson has admitted that securing oil supplies is a key factor behind the presence of Australian troops in Iraq.

He said maintaining “resource security” in the Middle East was a priority.

The remarks are causing heated debate as the US-led Iraq coalition has avoided linking the war and oil.

Anti-war protesters say the government’s admission proves that the US-led invasion was more of a grab for oil rather than a genuine attempt to uncover weapons of mass destruction.
(Source: BBC News)

Well, the above “revelation” is no surprise to anyone with even a shred of rationality. But let’s just follow where it leads.

The US enlists oil-hungry allies like the UK and Australia to invade a sovereign, non-aggressor nation on the pretext of finding WMDs.

No WMDs of any kind were found.

Then, having bombed Iraq flat and destroyed any pre-existing security infrastructure, these brave allies wring their hands at the carnage around them.

USA: “Oh look – Iraq is a bloodbath now! We have to maintain our presence to stamp out all the evil foreign invaders (apart from us)! We have to establish peace and democracy by torturing innocent Iraqis to death in Abu Ghraib and killing another 655,000 of them! THIS IS OUR CHARITABLE DUTY! It’s not about the oil, oh no…”

Australia: “Oi, mate – it is about the oil. You drongoes.”

If you studied history, you’d be hard pressed to find any altruistic wars. Wars are always about resources and power. Whether the battles are over territory or oil, trade routes or goldmines, wars are always fundamentally about the same thing.

If anyone still believes the pre-emptive invasion of Iraq, a war crime in itself, was for the good of the Iraqi people, I’ve got some bridges I’d like to sell them.