But I’m still buzzing from playing keyboards for Cats On Fire this evening at their Nottingham gig. I only played on three songs but I had tremendous fun and it was an honour to play with one of the best current pop bands around.

Yep, you heard that right, not indie or indiepop (though they are both of things as well, of course) – Cats On Fire transcend genre to be simply a consummate pop band. I’ve you ever hummed along to ‘High Land, Hard Rain’ or ‘Pisces, Aquarius, Capricorn & Jones Ltd.’ or ‘Eligible Bachelors’ or ‘Separations,’ then Cats On Fire are a band you need to hear. They come from that lineage: enormously catchy melodies coupled with beautiful lyrics, imagery you’ll remember the day after hearing a song. Click the pic for a small gallery of the day

If you haven’t already, please buy their debut album here and then you can be really smug about it in a couple of years when they’re famous. 🙂 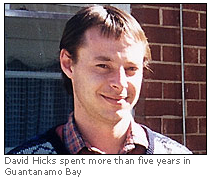 The trial of Australian national David Hicks at Guantanamo Bay was a charade that served to corrode the rule of law, Australia’s top legal body has said.

The Law Council of Australia called government support for the US military tribunal process shameful.

In a report on the issue, the council drew a parallel with the case of detained Indian doctor Mohamed Haneef.

David Hicks was arrested in Afghanistan in 2001 and spent more than five years in the Guantanamo Bay detention camp.

“There’s an ‘Alice in Wonderland’ quality to both these cases – ‘First the sentence, then the verdict’,” [Australian Law Council President] Mr Bugg said.

“Mr Hicks and Mr Haneef both know what that feels like,” he said.
(Source: BBC News)

Think of how much the world, how public opinion was so behind the USA after the disgusting 9/11 attacks. We were all shocked and horribly disturbed by those murders – it all felt terribly unreal and yet it was happening.

Now, only six years later, the US government has managed to take the huge groundswell of international support post-9/11 and convert it into a barrage of antipathy, distrust and outright hostility. With their gulag in Guantanamo, their killing of 655,000+ Iraqis, the vastly botched occupation of Iraq, only insane Republicans would now claim that Bush and co. have been doing a sterling job. It’s been a disaster.

David Hicks was caught in the USA’s madness. He was held with no charges whatsoever, no evidence, no due legal process. He was kidnapped.

For more than five years.

I can’t even begin to think myself into his position. You’re held by a country that you know supports torture, that you know has no regard whatsoever for international law. That, in fact, laughs at the Geneva Conventions and considers them quaint.

If this had been the other way round…

Imagine if North Korea had decided that a British or American citizen was a counter-revolutionary. Imagine if they’d held him or her for five years in a prison well-known for torture.

What would the international outcry have been like then? Every country would have rushed to shout their condemnation.

But when the USA acts in a totally immoral, evil fashion… we hear nothing. An abomination like Guantanamo can go un-mentioned, conveniently forgotten by our politicians. Let’s not talk about that, eh, frightful business but we can’t fall-out with the Americans, can we?

The fact that the Australian Law Council has now condemned the USA’s actions is a first, tiny step.

Perhaps it’s time our shiny, new Prime Minister spoke out against the horror of Guantanamo.

Or is horror only bad when our enemies commit it? 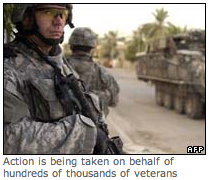 A coalition of US military veterans of the wars in Iraq and Afghanistan is suing the US government.

The class-action lawsuit on behalf of hundreds of thousands of veterans claims they have been denied disability pay and mental health treatment.

The legal case against the US Department of Veterans Affairs (DVA) seeks widespread changes in the agency.

It says the DVA has deliberately cheated some traumatised war veterans out of benefits owed to them.
(Source: BBC News)

Behind all the bullshit jingoistic rhetoric lies this simple truth: the US government will happily send you off to die or be maimed in Iraq and Afghanistan but it won’t give a damn about you if you make it home. In fact, it’ll try to cheat you out of your due benefits.

Honestly, how bad must the situation be for veterans if they have to resort to bringing suit against the government?

The second anniversary of the shooting of Jean Charles de Menezes is to be marked by a ceremony on Sunday.

The Brazilian was shot dead at Stockwell Tube station on 22 July 2005 by police who had mistakenly identified him as a suicide bomber.

On Friday night an image of the Brazilian – accompanied by the words “Two Years, No Justice” – was beamed on to the side of the Houses of Parliament.
(Source: BBC News)

Of course, it might have helped if the Met hadn’t promoted one of the people responsible for de Menezes’ murder. But that’s British justice for you. Remember how they tried to cover up their crime:

Police officers are facing criminal charges over allegations that they tampered with evidence after shooting dead an innocent Brazilian at a London Underground station, The Independent on Sunday can reveal.

Police surveillance officers allegedly tried to disguise the fact that they had mistaken Mr de Menezes for Hussain Osman, the alleged terrorist being hunted for a failed suicide bombing on the Tube.
(Source: The Independent)

And this is the same Met that now wants to bring in internment: they want to be be able to arrest anyone with no evidence whatsoever and hold them for as long as they want, years if they feel like it. They need to do this because of the WAR ON TERROR! All of this is to save us from the evil terrorists who want to steal our freedom and murder us.

I suppose if the police steal our freedom and murder us like they did de Menezes, that at least cuts out the middle-man. It’s more efficient, innit?

Based on their recent track record, would you trust the British police?

Phew! I though it’d be dead tonight because of the crappy weather but it was actually quite busy for a bit. And I had loads of requests! Eagle-eyed readers may notice that I even played Au Revoir Simone twice tonight as it was a happy/sad special occasion. 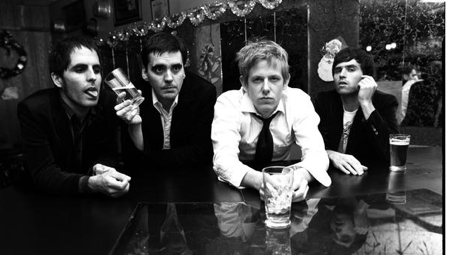 The best new track tonight was ‘Finer Feelings’ by Spoon. It’s from their new album, ‘Ga Ga Ga Ga Ga,’ and it’s one of the finest pieces of guitar pop I’ve heard this year. I’ve played it every week since I started DJing again and it’s a real grower. Spoon have this knack of making tracks seem spacious and yet cramming loads of melodic, twiddly flourishes into them. Good to see a lovely album like their newie cracking the proper US charts! 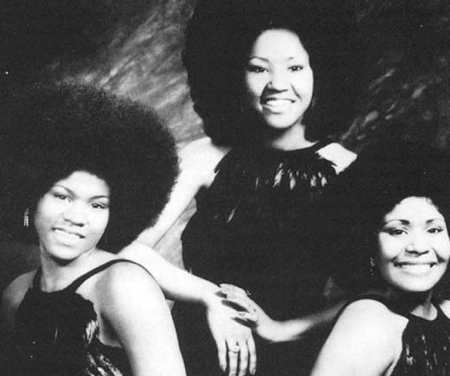 The best old track was The Emotions‘ ‘Best Of My Love.’ I mean, come on – who doesn’t like this track? The beat, the melody, the lyrics, the harmonies, that “Owww” that De La Soul sampled… Pop perfection! A doodle what I just did.

Can you tell I didn’t get much sleep? 😀 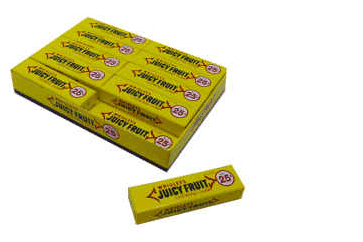 9 out of 10 Cortinas prefer the flavour of Juicy Fruit

I seem to have come over a bit asthma-y wheezy. It’s not bad, just enough to have completely stopped me sleeping. I was dog-tired around 3am but didn’t drift off because I couldn’t relax: I had to consciously breathe. My lungs sound like a bowl of Rice Krispies.

There’s no particular point to this post apart from giving me something to do while I wait for the day to start properly. Looks like it’s going to be grey and rainy. But while I’m here…

We were talking about how kids take things literally. I remember being that age. In some ways the world was more magical because of my literalist misunderstandings. For example: every time we went on a family trip when I was little, my Dad would stop at a garage and say, “I’m going to get some chewing gum for the car.”

Even now, whenever I see a packet of Juicy Fruit, I think of it as being the gum that cars like to chew.

Hello, I’m a red spider mite. I’m not in your blood, I prefer housebricks and tasty plants

I also used to study tiny insects a great deal when I was tiny(ish). I was fascinated by the miniscule creatures I found on bricks, bright red dots, so petite that they seemed to be perfect Platonic points of red. I clearly remember someone calling them ‘blood bugs.’ Aha – so these creatures must be what blood was made out of! What a fascinating discovery! I must have trillions of these scarlet marvels skittering around inside my veins. I was quite disappointed when I found out it wasn’t so.

Tumbles of misunderstanding like that flow through my early memories. I suppose they’re a feature of everyone’s childhood. As a grown-up, they make me smile and I remember the wonder of misapprehension and the rather dull embarrasment of reality. I was silly! I wouldn’t ever be that literal and gullible now. Oh no.

But every now and then, when I cut myself shaving, I stare at the blood on my fingertip and long for it to move. 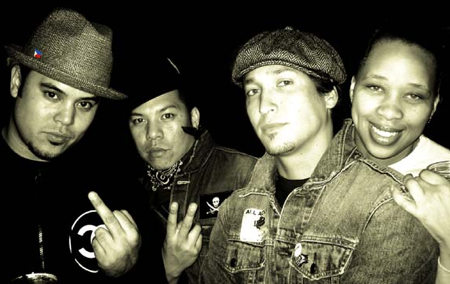 You know, every once in a while a hip hop album comes along that makes me happy. I mean really happy. Tonight’s best new track is off such an album: ‘The Know How’ by The Upstarts. ‘Got What It Takes’ melds a deliciously liquid jazz guitar riff over a kickass beat and then… well, the rapping matches up to the excellent music. If this group aren’t topping the charts in a couple of years, I’d be very surprised. 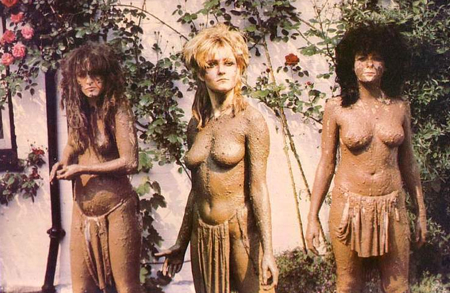 Like Devo’s version of ‘Satisfaction,’ The Slits‘ version of ‘Grapevine’ is a thing of pure joy. The thrumming, rubbery bassline, the marvellously free singing, the energy! It’s got to be one of my fave cover versions ever by one of the most original, challenging and genuinely alternative bands ever. If you don’t have any Slits in your collection, get some now!