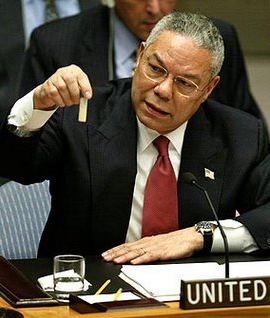 Above, Powell lying to the UN about Iraqi WMDs

Former US Secretary of State Colin Powell has called for the immediate closure of the US military prison in Guantanamo Bay, Cuba.

“If it were up to me I would close Guantanamo not tomorrow but this afternoon,” Mr Powell told US NBC’s Meet the Press television programme.

“Essentially, we have shaken the belief the world had in America’s justice system by keeping a place like Guantanamo open and creating things like the military commission.”

So, Colin Powell, one of the chief architects of the bloodbath in Iraq wants Guantanamo closed? Is it because of five years of torture, kidnapping and illegal imprisonment, including that of children?

Fuck the people held without trial after being whisked away from their homes on secret CIA flights, fuck their human rights, fuck the horror and humiliation. He doesn’t want people to think nasty things about the great American justice system!

Now, this is a man with his priorities and morals in order! Bravo, Colin! Yes, once the moral eyesore of Guantanamo is swept away and you carry on kidnapping and torturing innocents in other, dispersed prisons, that’ll make everything all better.

About 380 detainees are held at the prison, which was opened by the US government in 2002 to hold foreign terror suspects captured during the war against the Afghan Taleban and al-Qaeda.

A high-security facility at the Guantanamo US base in Cuba, it is not subject to normal US court rules.

The inmates, regarded as “enemy combatants”, are not given the same rights as prisoners-of-war.

Many countries have called for the camp to be closed.

UK prime Minister Tony Blair – a staunch ally of US President George W Bush – has called it an “anomaly” that should be dealt with “sooner or later”.
(Source: BBC News)