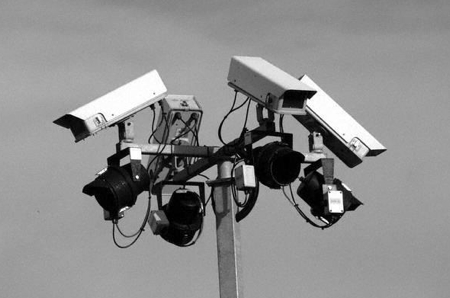 A senior police officer has said he fears the spread of CCTV cameras is leading to “an Orwellian situation”.

Deputy chief constable of Hampshire Ian Readhead said Britain could become a surveillance society with cameras on every street corner.

There are up to 4.2 million CCTV cameras in Britain – about one for every 14 people.

The UK also has the world’s biggest DNA database, with 3.6 million DNA samples on file.

This is another part of Butcher Blair’s grand legacy to Britain: we are the most surveilled nation on Earth. And it’s going to get even worse. Whether it’s the plan to monitor every single car journey or the money and freedom pit of ID cards, Blair’s Britain is the wet-dream of Stalinist commissars.

We now live in a country where we have less privacy than the average Chinese citizen. Ironically, this Friday, British MPs voted to keep their activities secret:

The House of Commons yesterday voted to exempt itself from its own Freedom of Information Act, ending the compulsory legal requirement for MPs to disclose their expenses and introducing further curbs on the release of already protected MPs’ correspondence.

The Liberal Democrat MP Norman Baker said after the vote: “This is a terrible day for parliamentary democracy and in particular for the House of Commons. I am ashamed to be an MP.”
(Source: The Guardian)

So, MPs want their activities to be private but everywhere ordinary citizens go, we’re subjected to banks of CCTV cameras and our DNA is retained just in case we commit some future crime?

For a change, I’ll give the last word to a copper:

“I’m really concerned about what happens to the product of these cameras, and what comes next?” he said.

“If it’s in our villages, are we really moving towards an Orwellian situation where cameras are at every street corner?

“And I really don’t think that’s the kind of country that I want to live in.”
(Source: BBC News)