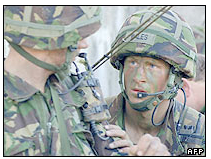 Prince Harry will not be sent to Iraq because of the “unacceptable risks”, the head of the British army has said.
(Source: BBC News)

Yes, of course. We can’t have our aristos dying in Iraq, can we? Leave that to working class men and women. I’m sure they can give Harry an extremely important detail like counting to ten or perhaps hilariously dressing up as a Nazi again?

Reg Keys – whose son Thomas was killed while on active service in Basra in 2003 – said he found the decision distasteful and questioned whether insurgents could have told the prince apart from other service personnel.

“It would appear that Harry’s life is more valuable than my son or the other nearly 150 service personnel who’ve given their lives,” Mr Keys added.
(Source: BBC News)