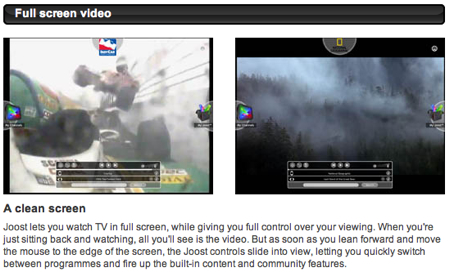 Joost (pronounced ‘juiced’) is a system for distributing TV shows and other forms of video over the Web using peer-to-peer TV technology, created by Niklas Zennström and Janus Friis (founders of Skype and Kazaa).

Joost began development in 2006. Working under the code name “The Venice Project”, Zennström and Friis have assembled teams of some 150 software developers in about a half-dozen cities around the world, including New York, London, Leiden and Toulouse. Joost’s CTO is Dirk-Willem van Gulik.
(Source: Wikipedia)

Well, thanks to the free invite, I’ve been using Joost for the last few days and…

Okay, it’s still obviously betaware. Yes, there are glitches and the quality of the picture makes NTL Virgin’s mangled delivery look hi-def. But it works! The OSX client is admirably simple and telly-like and it does the most important thing of any mass-market GUI: it removes as many controls as possible.

This is anathema to geeks, of course, because we want to twiddle and fiddle, to fuck around with settings till something falls over and then laugh at it.

However, if telly over the net is ever going to become a mass service, you need a simple, clean, untweakable interface. 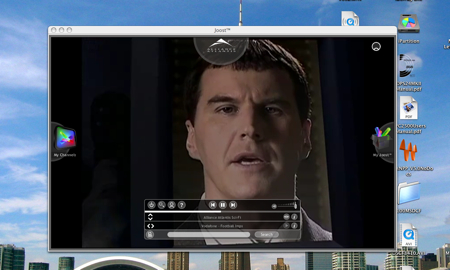 The first channel I tried to watch was, of course, the Sports Illustrated model showcase. Yes. And then I moved onto Total Recall 2070 which I’d never seen before. This was a real test of Joost and I have to admit the picture did block quite horribly in scenes with explosions / gunfights. But I still enjoyed the actual episodes, the disruption wasn’t severe enough to yank me out of the narrative.

Although these are very early days for this form of net TV, I can see it taking off. If I was a conventional broadcaster (with no ISP component to my business), Joost would start me sweating. As it stands, whether I watch their over-compressed transmissions or use Joost, either way I’m paying Virgin NTL since they supply my broadband.

The strength of Joost and every other form of IPTV is the way the viewer can choose how, when and where to watch. Yeah, I know Sky+ and other PVRs can do the same kind of thing but Joost is in another league entirely. The attraction for advertisers is that they’ll be able to target people like me who are drifting away from conventional telly because we’re not interested in Celebrity Badger Baiting or Jordan’s uterus.

Even though I hate advertising, it’s actually more accurate for me to say that I hate adverts for shit I’m not into, which is the vast majority of conventional advertising. It’s all spam to me. So, those companies are basically wasting their time and money. Whereas, when I’m watching vidcasts like dl.tv or Cranky Geeks, I don’t mind the ads at all – hey, they’re for stuff I might actually buy! Joost is nearly there in advertising terms: the HP ads are still a bit intrusive (you can’t skip them) and a bit too generic. I mean, come on! I’m a geek who’s watching Joost, I probably don’t care that Pharell thinks HP laptops are cool. Gimme specs or gimme nothing.

I have little doubt that Joost or something very like it will be how we all watch telly in the future. But don’t take my word for it, if you’ve got a fast connection, sign-up and decide for yourself! 😀