The Christian Socialist Movement, a political faith-based lobby group in London, praised Blair for speaking openly about his Christian faith throughout his time as prime minister. Despite his strong will to keep religion out of politics, Blair, an Anglican, has been one of the most publicly Christian prime ministers in Britain for more than a hundred years.

“Tony Blair has made no secret of his Christian faith and its importance to him, and Christian values have clearly informed government policies in the area of the minimum wage, giving pensioners, children and working families a better deal, and tackling global poverty,” said CSM Director Andrew Bradstock.
(Source: The Gospel Herald)

Yes, Blair the pious Christian, Blair the great peacemaker who has, according to his own PR, brought peace to Northern Ireland single-handedly.

It’s just a very fortuitous coincidence that he announced his resignation the week of the final peace deals being broadcast. I mean, come on, he didn’t plan it that way, did he? That would be cynical and manipulative. That would be like saying that this country was “45 minutes from attack” by Iraq. Or manufacturing evidence of non-existent weapons programs.

Ordinary human morality cannot constrain Blair: his God whispers directly into his ear. Just like Bin Laden’s God. So, even when Blair is dripping with the blood of 655,000 Iraqis murdered in a crusade for oil, Blair can still sleep at night.

I mean, fucking hell, if I’m horrible to one of my friends, hurt their feelings, I worry about it. I lose sleep.

Not our Tony! He’s made of stronger, more psychopathic material! So those Iraqis are dead – so what? So 3.4 MILLION Iraqis have fled the wonderful peace and democracy that Tony has brought them, the ungrateful swine! So what? So 148 British soldiers have died – Tony doesn’t care!

The most obvious single feature of the Iraq war is that it was not waged by the international community that Blair had celebrated in his first term. It was waged by Bush’s infamous “coalition of the willing” – the US, Britain and a distinctly unimpressive gaggle of minor allies – in defiance of the only body entitled to speak for any international community worthy of the name.
(Source: The Guardian)

He knows he was right. Right to lie, right to illegally invade, right to ally himself with a neo-fascist American program.

But there are some who’ll be glad to see the back of Blair:

This, too, is mild compared to what is privately said in the Foreign Office and MoD. Senior diplomats have told me it would not upset them too much if Blair were tried as a war criminal. But while neither Blair nor any of those who launched a war of aggression and occupation in Iraq have been held to account, a civil servant and MP’s researcher were yesterday shamefully jailed for exposing some of the dealings between Bush and Blair that lay behind the war.
(Source: The Guardian)

Oh yeah – I nearly forgot. At the same time as the mass-murderer Blair was receiving oleaginous tributes from the mass media, two people were jailed for leaking a memo of a meeting between Bush and Blair. 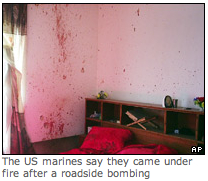 A US Marine who led the unit accused of killing 24 Iraqi civilians in Haditha shot five men as they stood with their hands in the air, another marine said.

Staff Sgt Frank Wuterich then told his comrades to lie about it and blame the Iraqi army, a court heard on Wednesday.
(Source: BBC News)

Does this kind of base brutality from the US military even surprise anyone any more?

As much as the Haditha Massacre will be dismissed, yet again, as a ‘few bad apples,’ surely the truth is of a violent, rapacious occupation in which Iraqis are deprived of all human rights by an occupying force which sees them as less than animals.

Witness the murder of these five unarmed civilians: Wuterich shot them dead. Then another soldier “sprayed” the bodies with more bullets. And then, Wuterich went round and shot them all in the head again.

That isn’t caution. That’s hatred. That’s the hatred Nazis had for Jews.

Of course, the soldier testifying tries to justify their hatred, citing the death of a comrade. So, in the course of the illegal occupation of a foreign country, committing what the Nuremberg Tribunal called a war crime, their comrade was killed. So, vengeance must be taken on unarmed Iraqi civilians. “We illegally invaded your country to steal your oil, how dare you shoot at us!” Yes, that makes perfect sense.

People look at footage of concentration camps and wonder how those German soldiers could have committed such atrocities. How did the world let them get away with it?

Well, look at Iraq now. Torture and murder are being carried out everyday against innocent civilians by an occupying army.

And the world doesn’t do a damned thing.