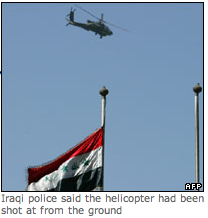 An attack by a US helicopter against suspected insurgents in Iraq has killed a number of children at a primary school, Iraqi security sources say.

The attack took place in Diyala province north-east of Baghdad, the sources say.

The officer said police had spoken to eyewitnesses and that six children had been killed and six injured but the figures have not been independently confirmed.
(Source: BBC News)

Yet more casualties in the US’ brave campaign to bring peace and democracy to Iraq.

Let’s hope they never try to bring their brand of peace and democracy to Britain.

Unless you particularly want your kiddiewinks strafed to death by trigger-happy rednecks.