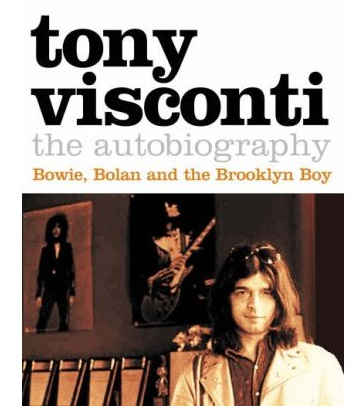 It was a cracking read. Yes, I’m going to get more out of it than the average reader as I’m a musician, engineer and producer. But even someone with no involvement at all in making music would love all the anecdotes that Visconti (and his co-writer Richard Havers) spills out.

He’s got enough coverage, after all. This is the man who, as it says in the unwieldy title, went from Brooklyn to working with David Bowie and T. Rex. Also Eno, Iggy Pop, Altered Images, The Boomtown Rats, The Stranglers (yep, he produced ‘Golden Brown’), Paul McCartney, Thin Lizzy, The Moody Blues, Hazel O’Connor… well, you get the picture.

This isn’t a flowery book: the style is quite un-adorned and straight-forward. Mostly, this suits Visconti’s breathless narrative push but occasionally, I wish the book would take a slightly more circuitous and poetic turn. I’m probably wrong but I get the sense that some of that more emotional stuff has been held back as being too private. Sure, we get all the important bones of his life, it’s just that I want a bit more meat. Every now and then, you’ll get a sentence like ‘we had an affair – Mary found out’ and that’s it. As a reader, this makes me go ‘woah – what happened? Tell me that conversation!’ But, as I said, he most likely doesn’t want to.

That’s a minor quibble when put in the context of a read that’s both funny and sad, informative and enlightening. I don’t want to give the impression this is a heartless book: it often goes into detail on certain painful events. It’s very touching when Visconti talks about his drink problem and the effect on his kids.

Also laudable is that when Visconti relates incidents which might show people like Bowie, McCartney or Bolan in a negative light, the framing is sensitive. This isn’t a bitter book written to settle old grudges. But I guess if the bloke’s been doing two hours of T’ai Chi every morning since the eighties, he’s probably past all that.

If you’re a fortysomething or older, you’ll probably love this book. If you’re younger but you’re a Bowie / Bolan / retro pop fan, again, you’ll love hearing detailed history from someone who was actually there. If you’re a musician or engineer/producer, I’d say this is pretty much an essential text.

There’s a lot to be learnt from this book!