A US survey of battlefield ethics among troops in Iraq has found widespread tolerance for torture in certain circumstances and problems with morale.

The survey, by an army mental health advisory team, sampled more than 1,700 soldiers and marines between August and October 2006.

The Pentagon survey found that less than half the troops in Iraq thought Iraqi civilians should be treated with dignity and respect.

More than a third believed that torture was acceptable if it helped save the life of a fellow soldier or if it helped get information about the insurgents.

About 10% of those surveyed said they had actually mistreated Iraqi civilians by hitting or kicking them, or had damaged their property when it was not necessary to do so.
(Source: BBC News)

Is it any wonder that the “insurgents” never cease their resistance to the illegal occupation of their country when this is the morality of the occupiers?

But I’m bound to say that, aren’t I, rabid lefty that I am. So here’s the opinion of Flight Lieutenant Malcolm Kendall-Smith:

“I have evidence that the Americans were on a par with Nazi Germany with its actions in the Persian Gulf. I have documents in my possession which support my assertions,” he told the court. “This is on the basis that on-going acts of aggression in Iraq and systematically applied war crimes provide a moral equivalent between the US and Nazi Germany.”
(Source: The Guardian)

Now, this survey of the US occupying force itself confirms what Kendall-Smith said all those months ago and was villified for stating.

Look at this sentence from the quote above:

“The Pentagon survey found that less than half the troops in Iraq thought Iraqi civilians should be treated with dignity and respect.”

So, the majority of US troops surveyed, most of the grand liberators bringing peace and democracy to Iraq, don’t believe Iraqis should be treated with dignity and respect. This is a horrific revelation about the true nature of the US presence in Iraq.

It should be top news on every TV bulletin. But it isn’t.

Our media has grown bored with the hell that is Iraq. Every day, more people die in car bombingss and are tortured and slaughtered by the invading US forces. None of that even merits a cursory mention in the mass media.

Imagine how much of our news this would take up if it were China or North Korea carrying out this illegal occupation instead of the US. Just a few snaps of the birthday girl by the Quad construction site and ambling round Derby. 🙂 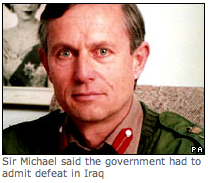 Insurgents in Iraq are right to try to force US troops out of the country, a former British army commander has said.

Gen Sir Michael Rose also told the BBC’s Newsnight programme that the US and the UK must “admit defeat” and stop fighting “a hopeless war” in Iraq.

He told Newsnight: “As Lord Chatham said, when he was speaking on the British presence in North America, he said ‘if I was an American, as I am an Englishman, as long as one Englishman remained on American native soil, I would never, never, never lay down my arms’.
“The Iraqi insurgents feel exactly the same way.”

He said it was time to bring troops home.
(Source: BBC News)

I’m currently watching the election results. New Labour’s Tebbit, John Reid, is laying out his usual doses of braying and bullying and no-one is mentioning the war.

They’re talking about the possible exit of Tony Blair next week as if it’s just another Prime Minister retiring.

But this is Butcher Blair. The British leader responsible for taking us into a phoney war, the PM who lied to Parliament and manufactured evidence in his quest for power and oil.

He is, simply, a war criminal.

Michael Rose knows and understands this far better than Reid and all the other New Labour criminals. He’s already called for Blair’s impeachment.

And now, he’s saying what most of the world already thinks: the people labelled as “insurgents” by the US could equally be viewed as resistance fighters, trying to oust a vicious, illegal occupation of murderers and torturers.

You won’t hear any of this on the election news tonight… its all the froth and frippery, the biggest issue of the last four years isn’t even getting a mention.

EDIT – I’ve just watched another New Labour cunt declaring Blair “an excellent Prime Minister.” So, taking part in the killing of 655,000+ Iraqis is commendable leadership, is it? Just how many kids does a Labour politician have to murder before they break ranks?

I’ve got to switch over now, I’m too fucking angry.