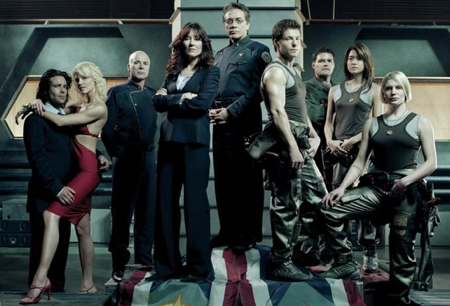 See the pic above? It’s the cast of my favourite new SF series, Battlestar Galactica. (Well, almost new, since it’s a “re-imagining.”)

Thanks to the pinheads at Murdoch TV, I can no longer watch BG.

But I’m not sure that it matters any more.

Last week, I bought an Apple TV. Since then, I’ve got hooked on video podcasts (or vodcasts, as no-one calls them). I’ve tried watching them before but, frankly, couldn’t be arsed. When you watch something on a laptop, it’s always too tempting to check your email or whatever.

But blow up a podcast via Apple TV onto your telly and that changes. It’s just another telly programme! And since a lot of these podcasts come in larger formats now, they aren’t even that jaggy or YouTube looking.

The major difference is that you watch what you want, when you want. While this may sound like what you can do already, it isn’t because the video podcast world is tremendously niched. For a geek like me, I can now watch programmes with content I would never find on any terrestrial, satellite or cable channel. Here’s a couple I’ve got hooked on… 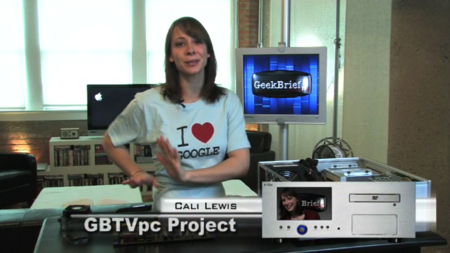 GeekBrief is presented by Cali Lewis and I’ve watched about thirty episodes so far. She’s a proper geek so she naturally goes bouncing round the place when talking about Ubuntu or motherboards. When mainstream telly is getting dumb and dumber, it’s only in podcasts that you’d find this kind of content. 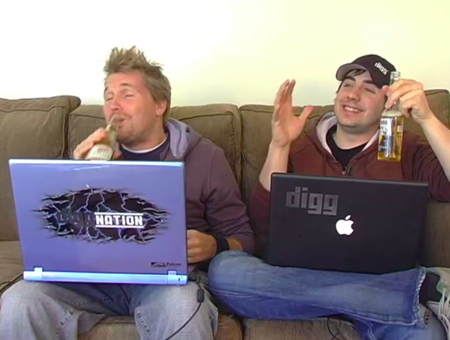 Diggnation is some of the funniest shit I’ve seen in a long time. It’s presented by Alex Albrecht and Kevin Rose and, ostensibly, it’s a review of top stories on Digg, the socially-driven news site. I say ostensibly because each episode rarely covers the stories and instead ends up being a series of rambling, confused and often obscene anecdotes.

Sounds potentially awful and it would be – if it was presented by anyone else. But Albrecht and Rose are major, major geeks. Critics may try to paint Diggnation as a modern Wayne’s World but, as much as it’s peppered with ‘DUUUUDE!’s, these blokes have immaculate timing and ad-libbing skills and they’re razor-sharp even when they’ve chugged a few beers.

There are many other video podcasts that I’m only now discovering. Before, they just weren’t appealing to me. Now they’re on my lovely, big telly via my lovely, shiny Apple TV, it’s a different matter. Okay, there are a lot of vodcasts that are pretty poor. But they’re still better than Celebrity Liver Transplant or whatever new monstrosity the TV programmers come up with.

What’s all the above got to with Battlestar Galactica? Well, if I lived in the US, the lack of Sky One wouldn’t bother me. I could buy all the episodes of BG from iTunes. That’s not been sorted out here yet – there is no TV you can buy on the UK iTunes as yet, the TV Show section of my Apple TV is sadly unpopulated. So, as much as I’m already enjoying the sense of liberation it’s giving me, it hasn’t even had a chance to reveal its full potential yet…

Niche TV, the end of the bland majority programming that seems to be getting more vapid and degenerate every year.