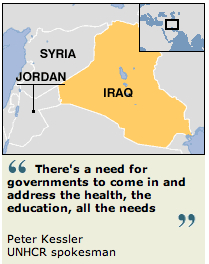 He said the international community had to step in to help address their food, health and education needs.

The international failure that Peter Kessler highlights is a product of ideology. Here’s how:

Bush & Blair portray the invasion of Iraq as a selfless quest to remove Saddam Hussein, huge reserves of WMDs and bring democracy to the oppressed Iraqis. According to Bush, this high moral crusade was completed, brilliantly, way back in 2003: 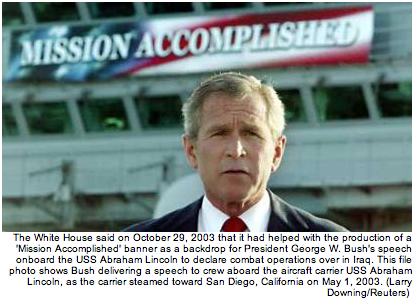 Yes. Despite the fact that there were no WMDs and the invaders cared more about oil than people, it was ‘mission accomplished,’ complete with staged media spectacles:

So… Bush, Blair and the oil-hungry neocons behind the invasion have taken great pains in constructing their propaganda war. According to them, the Iraqis would be jubilant at the removal of Hussein and welcome the US military much as the French had welcomed them when they ousted the Nazis.

But the opposite has happened. Now the US forces are viewed as occupying invaders and are the targets of an “insurgent” movement every bit as determined as the French Resistance. Four years after Bush declared ‘mission accomplished,’ Iraq is a bloodbath and, naturally, innocent civilians are fleeing the carnage.

Therefore, as Kessler says, the Iraqi refugees get brushed under the carpet. We don’t talk about them, despite the fact our actions created them. Just as we don’t mention the 655,000 Iraqis we’ve murdered in order to liberate them from tyranny.