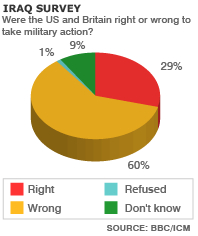 A third of people in the UK think the war in Iraq was justified but six in 10 believe it was a mistake, a BBC survey suggests.

While 29% said taking military action against Iraq in 2003 was the right thing to do, only 5% of those questioned felt safer now.

The survey also found that more than half of people questioned said they would distrust the British government if it said military action were needed elsewhere because a country posed a threat to national security.

And while 5% thought Britain was a safer place since the Iraq war, 55% said they felt the country was less safe.
(Source: BBC News)

I’m amazed that even 5% of people think Britain is safer since our illegal invasion of Iraq. These people must be unaware of the bombing campaigns that we’re now targets of. And the fact that the police can shoot you seven times in the head as a suspected terrorist and then get away with that murder. They even get promoted for their part in their ‘regrettable mistake.’

Beating up innocent OAPs in their own homes, RFID passports, trigger-happy police death squads roaming our streets with impunity – welcome to the new police state.