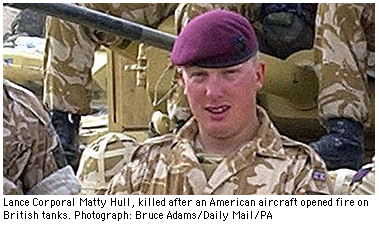 The friendly fire death of British soldier Matty Hull was unlawful and the result of a criminal attack, a coroner ruled today.

Oxfordshire assistant deputy coroner Andrew Walker criticised the US authorities for failing to co-operate with his investigation and said: ” I believe that the full facts have not yet come to light.”

He added: “The attack on the convoy amounted to an assault.

“It was unlawful because there was no lawful reason for it and in that respect it was criminal.”
(Source: The Independent)

There you have it. The official verdict of the coroner is that the US military committed a criminal act when it killed Matty Hull.

Moreover, he severly criticised the US’ subsequent cover-up in that it refused to help with the investigation.

Par for the course for the US military, whether it’s My Lai or Haditha.

The US, naturally, rejects any charges:

The US State Department has rejected a coroner’s conclusion that the “friendly fire” death of a British soldier in Iraq was unlawful and a criminal act.

Speaking at a State Department briefing in Washington, Mr McCormack said: “Clearly we don’t agree with the assessment. What we have here is a tragedy that occurred during a time of war.

“We have conducted an investigation into the matter – our military has – they have come to their own conclusions.

“We certainly would not agree with any conclusion that categorised this as a criminal act.”
(Source: BBC News)

No, of course not. The US military does what the hell it wants and never pays the consequences. It’s all hushed-up and forgotten. Whether it’s shooting unarmed civilians in the back as they flee in terror or killing British soldiers, they simply don’t care.

What will Blair say to the US about Corporal Hull’s death? What protest will he lodge with his good friend Bush?

I predict the silence will be deafening. I haven’t done any doodles in a while. This one is quite Easter-y! 😀