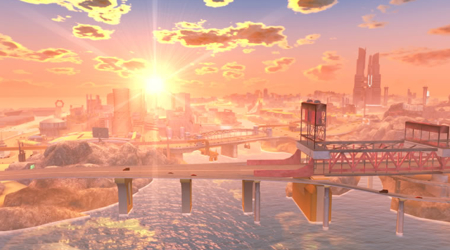 As you may know, I’ve become slightly obsessed with the Xbox 360 game Crackdown.

I got stuck for a while at the end of last week. I couldn’t kill any of the Volk bosses, let alone the Shai Gen hoods. But today I managed to kill an SG baddy and nick his rocket launcher! Yaaay! Now I’ve wasted two Volk bosses from an appropriately cowardly distance. 🙂

A side effect of this intense (for me) gaming is that my brain is now operating in Crackdown mode even when I’m not playing. As I’m walking around, I swear I keep hearing that Hidden Orb sound…

Today, I went down to the Oakwood shops. As I was leaving my car, I looked up and thought, “Hmmm… yeah, that’s a good roofline there – I can hide behind the corner and then grenade criminals by jumping up and targetting.”

The mark of a great game is when it starts to seep into your non-gaming life. Whether it’s Wizball or Klax, Bust-a-Move or Mario Kart, the great games leave their mark on your brain. I still miss Rokkaku-Dai Heights. Now, Crackdown has made a little place in my heart.

Also, as I’m rubbish at games, I get far more value-for-money. I bought Crackdown for thirty quid. I must have played it for at least 30 hours now so that’s a pretty good deal. A “proper” gamer would have finished it in under ten hours and not have had half the fun I’ve had exploring the brilliantly detailed and enormous gameworld.

The mise-en-scène of Crackdown is marvellous – the 3-d modelling, the colours, the character design and AI, I can’t fault this game. Add all this to the most immersive, sumptuous sound design I’ve yet heard in a game (and that’s actually crucial to gameplay) and you have a classic.

Now I’m progressing again it’s a bit… sad. I have that same feeling as when I’m reading a gripping novel. I know that the more I read, the sooner it’ll be over. I want to make it last as long as possible.

Hmmm… maybe I’ll just try to do the rest with a handgun! 😀

Just got the following from an old mate of mine:

When you say you are rubbish at games at have to take exception to that – I was there one of the many times you were playing Donkey Kong in the Wilmorton refectory and the machine killed you because you were costing it electricity money!

Many moons ago I know – but I was there.

God… I’d forgotten how obsessed I was with the original Donkey Kong. Run, jump barrel, wait at ladder, climb, jump barrel… That was twenty-five years ago but it seems like yesterday! 😀