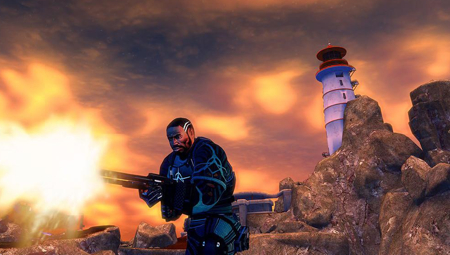 Above: me, last night at around 3.47am. I’m looking quite ripped, innit?

I don’t normally post reviews of games up because, to be frank, I’m shit at them. Yes, I’ve spent hours running round the levels of Impossible Mission II, bouncing grenades round corners in Goldeneye and shelling the crap out of people on Baby Park. But I’m no gamer. I’m particularly bad at the big manly-man games that teenage boys love so much, you know, the ones where you get extra points for punching women in the face or smoking cigars. I find them rather tiresome and corny.

But now I’m hooked on Crackdown!

Yes, it’s a lot of the same old, same old. You have to do missions which involve shooting people and racing round in cars. I quite like the fact that you’re meant to be on the side of the angels, taking out nasty gangsters. Of course, in the real world, the law enforcement agencies don’t care that much about tackling crime, they prioritise bullying old men and shooting innocent people in the head seven times.

In Crackdown, if you do that kind of shit, you get targeted as having turned rogue and get taken down by the cops. If only real life was as moral as games, eh?

The best thing about Crackdown is that if you’re rubbish at games, as I am, you can still play it. It’s very forgiving and the missions don’t ramp up too quickly in difficulty but do get tough enough to be an entertaining challenge. The initial gangsters are pretty easy to assassinate, you simply have to walk up to them and cough in their direction. But soon they’re in elaborate hideouts that have to be approached stealthily and they’re surrounded by swarms of heavily-armed racial stereotype henchmen (and women!). This requires some brain power rather than trained-monkey button-mashing.

Last night, at 4am, I finished all the missions in the first district. Yep, me! I never finish sections of a game. I gave up on Halo and just started driving around and blowing myself up with grenades to see my body fly around. But with Crackdown, I’m actually doing the missions!

I love all the extras. If you get bored of shooting people (it can get a tad wearing, after all), you can just collect the agility orbs instead. That makes the game into a gigantic platform puzzler, with the bonus of having random gangsters zinging bullets at you as you’re balanced on a precarious ledge.

Honestly, I’ve not played a game this much since the Ratchet & Clank series. And I could only keep playing that by using cheat codes!

So, if you’re not a rabid gamer and don’t mind a bit of shooting and carnage, check out Crackdown. It’s spiffy! 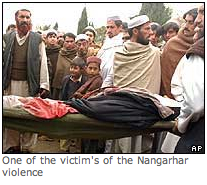 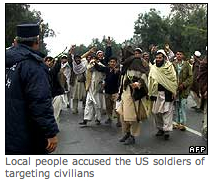 An incident described by US forces in Afghanistan as a “complex ambush” has left at least eight civilians dead.

US officials initially said 16 people had been killed. They did not explain the lower, revised death toll.

Thousands of local people took to the streets, accusing the Americans of deliberately firing on the civilians.

Mohammad Khan Katawazi, chief of Shinwar district, said the US troops treated everyone as a potential attacker even if they had no evidence.

One injured civilian, Tur Gul, told the Associated Press news agency: “They opened fire on everybody, the ones inside the vehicles and the ones on foot.”

Thousands of people gathered to demonstrate against the shooting, shouting “Death to America, Death to Karzai”, referring to the Afghan president, and blaming the US patrol for shooting passers-by.
(Source: BBC News)

Further to this previous rant, here’s the same shit in a different country. The US military killing innocent civilians and these deaths not mattering in any way whatsoever to the larger media world.

There will be no hand-wringing about the dark rise of terror, no concern in the corridors of Western power about “lack of stability” or “foreign interference” because the people carrying out these murders were US troops. When the US or UK forces kill civilians, that’s okay. When “insurgents” kill them, that’s bad.