I couldn’t wait to get my hands on an Apple TV and I managed to buy one at GHC in town today. Yaaay! I took some pics of the unboxing, for all you Apple obsessives, just click the pic above for the gallery.

The installation was the usual Apple breeze. Plugged in the power, plugged in the HDMI lead and… that’s it. When the Apple TV booted, it came up on my telly (via my AV amp) and I set the language and screen res: Then I synced it to my Macbook Pro and had a cuppa while all my vids and podcasts and some of my music library was transferred. I had to cherry-pick what music was transferred because the Apple TV has a 40 gig hard drive and my music collection is now at 209 gigs. And, yes, it is all legal!

My first impressions is that this is an extremely well thought-out and designed bit of kit. No big surprise there as it’s an Apple product. But the Apple TV is even slicker than normal: it’s iPod slick. Apple have made this a pretty foolproof media hub. Yes, you could argue that this means they’ve left out some potentially uselful geekier functions but I think they made the right decision. I don’t think this gadget will intimidate anyone. In fact, it’s user interface is definitely easier to navigate than most TVs and video recorders I’ve had.

The sound quality is far better than I get by running a bloody long lead from my Macbook Pro to my amp. Music sounds more spacious, stereo definition and placement is more precise and dynamic bandwidth seems greater too. The picture quality is equally impressive. Of course, if you feed the Apple TV low-res podcasts or YouTubed vids, it can’t make a silk purse out of a sow’s ear and you will see jaggies and blocking. When you view some of the HD film trailers from the Apple site, that’s when you can see possibilities of this little gizmo. It’s making me itch to rip all my DVDs!

I’m going to try some other experiments with it tomorrow but so far, brilliant! 😀

Keep watching till the end, that’s when the best bit is! 😀

(Via my mrs. who spotted it on Boing Boing) I think there’s an Oakwood Banksy around! 😀 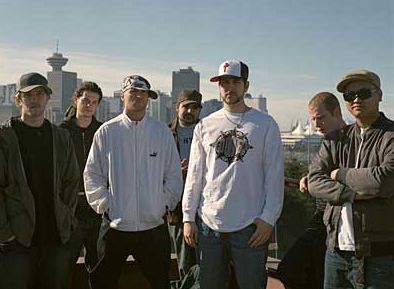 Following on from the previous post, this sums up how I feel at the moment:

The whole world’s a sweatshop, a fascist regime
With billions of parts, working as a massive machine
The goal, keep the masses, passive between
Cash, limosines and other fabulous things
But we gotta wake up and notice it’s a load of shit
It’s all about ownership, it’s all in who’s controllin’ it
Not bout the gold you get, not bout the clothes you’re in
It’s not about oil, but we’re killing each other over it
Like a Doberman, chomping on a cat
It’s a new world order, and they’re bombin on Iraq
And it’s so fucking heartless, the whole country’s starving
And yet, they’ve been targeted as a threat regardless
This all started in days prior to ours
They arrived from the stars, and survived in the dark
Now it’s time for the hearts of men
To march against it
And realize that the cycle starts and ends with…

Trust me friends, it could never just be us, or just be them
Sometimes I think it just depends, it’s just pretend
You can never trust a trend
Don’t rub your eyes, I’d rather you to just listen, look up to them?

Tell me, who the fuck are they?
When did they ever give a damn about what you say?
For what you stand, that’s why you gotta trust me man
Trust a Bush? That’s like saying trust Saddam
But for real, you gotta love the fam
Ask his dad the ex-prez how many drugs he ran
So trust us, this shits about to flood the land
Cause government hands can no longer plug the dam

So fuck the news, fuck the critics, fuck their views
And if you sit and let it happen then fuck you too
It’s up to you, I can’t tell you what to do
But touch the truth, and don’t just judge the few
But judge…

As I’m typing this, The Twang have just started playing on the telly. What a fucking contrast… 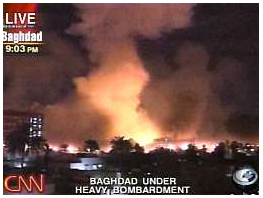 The “liberating” bombs of the US and UK forces – apparently completely harmless to Iraqis.

The British government was advised against publicly criticising a report estimating that 655,000 Iraqis had died due to the war, the BBC has learnt.

[…] the Ministry of Defence’s chief scientific adviser said the survey’s methods were “close to best practice” and the study design was “robust”.

Another expert agreed the method was “tried and tested”.
(Source: BBC News)

Please read the article, linked above.

Having read that, we can see that:

…a memo by the MoD’s Chief Scientific Adviser, Sir Roy Anderson, on 13 October, states: “The study design is robust and employs methods that are regarded as close to “best practice” in this area, given the difficulties of data collection and verification in the present circumstances in Iraq.”
(Source: BBC News)

So, at the same time as Blair was rubbishing the slaughter figures in the mainstream media, the Ministry of Defence’s own Chief Scientific Adviser was confirming their probable validity.

Remember, this was a peer-reviewed report, published in The Lancet. Nevertheless, both Bush and Blair delcared it faulty. Based on what? Their own scientific reports? Their own advisers? No.

Their denial of our slaughter in Iraq was based purely on political agenda. As much as Nazis deny the Holocaust, New Labour and US neocons deny our mass murder in Iraq.

So, we’ve helped kill 655,000 Iraqis. I know, even as I type this, that someone is sitting there, about to send me another bizarre email claiming that Iraqis are only killed in sectarian violence – cluster bombs and missile strikes apparently pass through them like a warm summer breeze. This is time for me to repeat the following:

And that’s just in the official figures kept by the US-installed puppet regime!
(Source: Right Here)

Look, I know it’s not easy to accept that your country, the US or UK or any of the “liberating” nations, is guilty of mass-murder. I know it would be far more comfortable to believe that your taxes weren’t being spent on shredding innocent people. But even if you put your hands over your eyes and ears, those 655,000 Iraqis are still dead. According to the best scientific study, since the illegal invasion of Iraq, we have killed 2.5% of the population of Iraq.

They were killed by our rogue governments, our war criminal leaders. Then, those governments started and continue to maintain a highly successful propaganda campaign to hide their crimes.

Has it worked on you? Lovely, lovely sunshine in town. Unfortunately so lovely that I spent more time soaking it in rather than taking pics. 🙂

But I did get a few! Click the pic above for more! A pic I took today. Soooo tired… Mosh was again excellent fun tonight, though it took a little while to get going properly. The last hour was rip-roaring fun. Particularly when DJ Corum graced the dance floor with his presence. 😀