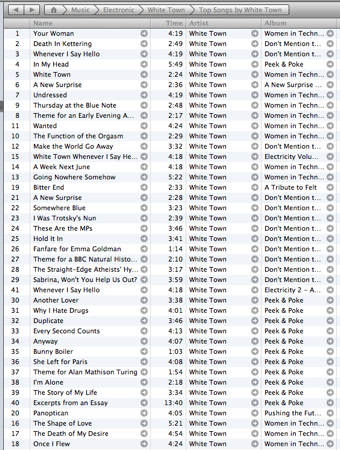 Above is the UK iTunes chart for my songs, ranked by sales. I’m very chuffed that slots two and three are songs from my new album, ‘Don’t Mention The War.’ Yaay!

Also cool is that number four is an acoustic ballad from my second album, ‘Peek & Poke.’

Soon, my first album, ‘Socialism, Sexism & Sexuality‘ will be added to iTunes too and then I’ll have all four albums I’ve done on there (the EMI one has been up for ages, of course).

This is only possible thanks to the magnificently transparent and helpful CD Baby. Apple are an absolute pain to deal with personally, CD Baby rode to the rescue! They make the whole process of selling my music, either physical CDs or online, very, very easy.

If you’re an independent musician like me, check them out! 😀

One of the senior officers in charge on the day Jean Charles de Menezes was shot dead by police has been promoted.

Commander Cressida Dick is now a deputy assistant commissioner – one of the highest ranks in the force, the Metropolitan Police Authority said.

The 27-year-old was shot seven times in the head and once in the shoulder at Stockwell Tube station after being mistaken for a suicide bomber on 22 July 2005, a day after the failed London bombings.

Lawyers for the Brazilian man’s family have been informed. When her promotion was first announced the family said they were “absolutely disgusted”.
(Source: BBC News)

Jean Charles de Menezes was murdered by the Metropolitan Police. The people that murdererd him are not just the officers who pulled the triggers, they are the commanders who oversaw this whole debacle.

Please remember, under the phoney-War-On-Terror cover, this could happen to you or any of your family.

You could be shot in the head seven times as a suicide bomber, even though you’re only wearing a thin shirt and jeans. No coat, no bag, no obvious explosives anywhere on you. Once they’d killed you, the police would cover it all up, just as they have with Menezes.

This promotion shows the utter contempt the Metropolitan Police and the UK government hold for our lives and for the life of Jean Charles de Menezes. It’s a slap in the face for his family, still denied any justice for their murdered relative.

Apparently, Butcher Blair is bleating about getting tough on gun crime. Perhaps he should start with the trigger-happy police?

Via BoingBoing, have a look at these lovely flowcharts of scientific versus religious thought, courtesy of Wellington Grey: 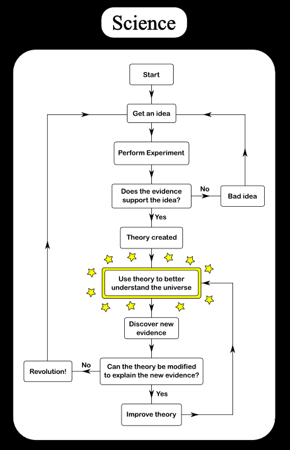 Yes, look at that. Lots of pesky brain usage, think of all the time that takes up. Time that could be better spent wiping out infidels and oppressing women! Let’s have a look at the religious mode of thought: 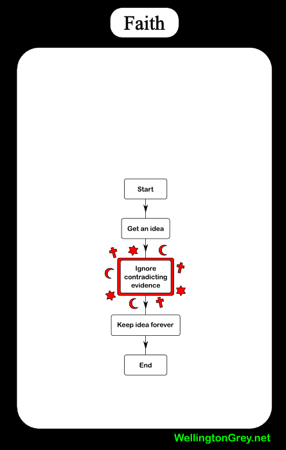 Now, isn’t that much less work? Me no brain hurt with duh religion!