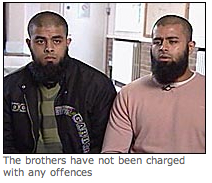 A watchdog has told the Metropolitan Police to apologise to the two families involved in the “terrifying experience” of the Forest Gate anti-terrorism raid.

The Independent Police Complaints Commission said it had upheld a small number of complaints about the operation in east London in June 2006.

One man was shot in the raid but he and another arrested man were not charged.
(Source: BBC News)

So… the police don’t like the look of you. You’re a bit browner than average, maybe you’re a Muslim. They manufacture some phoney War On Terror “intelligence” and break into your homes. They beat a 60-year-old man to the ground and pistol-whip another. Oh, and they shoot another unarmed innocent man.

After arresting you they… do nothing. No charges whatsoever are brought and the evidence melts away like February snow.

Then the IPCC steps in. Surely, they’ll extract justice for the innocents savagely attacked by the police.

They do a bit of hand-wringing and basically say, ‘Well, what do you expect – these are Muslims after all! They should be glad we’re protecting their safety by busting their doors down and beating the shit out of them. We’re the police – WE CAN DO WHATEVER WE WANT WHENEVER WE WANT!’

If this had happened to a white, Christian family, I have no doubt it would be front page news. It wouldn’t just be a side-column about “regrettable but necessary” police brutality.

Let’s just look at the facts again: the police invaded people’s homes, beat people to the ground and then shot one unarmed man. No charges were brought, these people were totally innocent. The police that did this are still working today and have suffered no punishment for their attacks on innocent citizens.

Mr Abdulkahar said: “I don’t believe any form of intelligence they have is justification to attack people like this, brutally attacking my dad.

“He is 60 years old, he was half naked and they were beating him on the floor.”

Hanif Doga, who lived at one of the houses raided and says he was struck on the head with a gun, said: “I could have died from this injury, yet the IPCC dismiss it as a minor head injury and call for no further action.”
(Source: BBC News)

Another whitewash from the IPCC.

If this isn’t a police state, tell me what is.