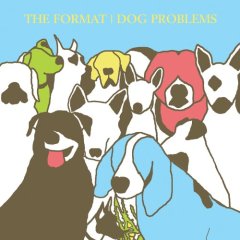 Hmmm… there are two ways I can put this. The first: that I let down all you lovely groinkers by not telling you about this fabulous album in my best of 2006 list. The second: this album wasn’t officially released in Japan until last week and god knows when in the UK. So maybe I should wait until the end of the year and include it in this year’s best of?

The Format are a shadowy band for me. I first played them just over three years ago and though I loved that song, I never kept track of the band.

Well, I missed out. I know I did because I’m now listening to one of the poppiest pop records I’ve heard in my life. ‘Dog Problems’ has got more catchy melodies on it than a Beatles’ singles comp, more joy and tragedy, more emotion and drama than a barrel of Panic fans going over Niagra Falls.

This is a truly great record.

But let me qualify that. Of course, not everyone will love it. Not everyone likes pop music. But if you’ve ever sung along with The Beatles or The Beach Boys, The Shins or Of Montreal, Red Kross or Phoenix, Harry Nilsson or Randy Newman, I think I can safely say you’re going to drown in this record. It will re-structure your brain.

A song like ‘Time Bomb’ would be the once-in-a-lifetime pinnacle of most bands’ careers. From the opening Vince Guaraldi-esque piano riff to the bittersweet lyrics, this is perfect, perfect pop. There’s not a thing wrong with this song. The harmonies, the keys, the drumming, the silly radio tuning noises all add up to a wonderful rush, the most joyful breakup song I’ve heard since… well… I don’t know. Look at these lyrics:

Tick tock, you’re not a clock
You’re a time bomb baby
You set the watch
You’re just in time
to wreck my life
to bring back what I left behind

That’s where I’d normally leave a review. But The Format won’t let me because ‘Time Bomb’ is just one of twelve great pop songs. Yeah, I admit since the whole album seems to be a break-up album, some people may call parts of it bleak. However, that would be as short-sighted as when people label Leonard Cohen miserable. They completely miss the rich, twinkling vein of humour in his work.

That same humour runs through ‘Dog Problems.’ It illuminates even the darkest parts. Look at the lyrics for ‘She Doesn’t Get It’:

Suddenly between sheets and eyelids I am reminded why I don’t do this
I fall in love far too quickly
I never want her to forget me
When you’re gone
Will you call?
Will you write?

That’s sad. But it’s also funny. I think, with this album, The Format have now officially got the right to patent Funny-Sad as their own original intellectual property.

Okay, I’ll try to be a bit less vague and arty-farty now. After all, I want you to go out and buy multiple copies of this album. So, what does it actually sound like?

Well, I’d call it power-pop. That’s a big genre, containing artists as diverse as Todd Rundgren and The New Pornographers, The Magic Numbers and Ben Folds. Fundamentally, it’s a vocals/guitar/keys/bass/drums album. It’s a very traditional collision of instruments and songwriting styles. The genius of The Format is that they take all these old things and scrape away the boring shit lesser artists have caked them with, they make them shiny and new again. They make them hurt and heal, they use them to make their songs soar and sear.

The title track, ‘Dog Problems’ is apparently about the writer, his ex and their habit of buying a dog after arguments. Umm… Not sure about that but here’s some sample lyrics:

“Boys in swooping haircuts you know who you are”

And so I walk the web in search of love
But always seem to end up stuck
I’m finding flaws in everyone.

C’mon! How can you not love those lyrics? Who hasn’t been brought down by boys in swooping haircuts? What’s more extraordinary is the musical setting, which starts off as prime oompah, ‘Daddy’s Song’ Nilsson but ends up quite Modest-Mousey near the middle before returning to the grand days of Vaudeville for a startling coda. Amazing. The Format have more ambition in this one song than most pop bands have in an entire career.

And then we’re off into the sublime ‘Oceans,’ ooohing and aahing at the sunshine, putting the top down and letting the sand blow into our lovelorn eyes. I’m waiting for summer to listen to this song. Goddamn but it’s summery!

Look, I’m going to wrap it up now because I know over-long reviews just put people off. I could rant about every song on this album. Hearing it has made me so very, very happy. But… but..

I can’t do it. I have to talk about just one more song… please?

What sums up the album for me is ‘Inches And Falling.’ I love the optimism of this song. After the battering we’ve gone through, this song is a marvellous liberation, a declaration of rebellion against the tyranny of misery:

If fingertips are relationships
Then maybe i could use a break
She smiles
She points at me
She says:
Baby i love how you sing
So just sing

Ladies and gentlemen, may I present to you, your new favourite pop band: The Format. 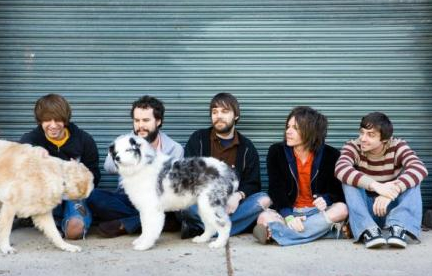