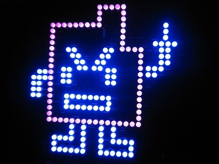 There was a terrorism scare in Boston today — strange devices were found all over the city. The bomb squad came and detonated one of them, and removed the others. Turns out the devides are part of a guerrilla marketing campaign for [Cartoon Network’s] “Aqua Teen Hunger Force.” The devices are little LED Moominites (sic).
(Source: BoingBoing)

Actually, they’re called Mooninites and they’re from one of my favourite ever cartoons, Aqua Teen Hunger Force. If you’re a fan of Danger Doom, you might also be familiar with the little bleeders.

This latest over-reaction proves that in a very real sense, the terrorists have won. A handful of delusional madmen, hiding out in caves, have managed to throw the mightiest nation in the world into a blind panic. If the objective of terrorists is to create terror, to make us jump at our own shadows, then Bin Laden and his cohort of mentally-diseased murderers must be feeling very pleased with themselves at today’s debacle.

I’m sure this story will be reported as something amusing by tomorrow. But it isn’t. Think about the people worrying for their lives and the lives of their loved ones. Think of the disruption this hyper-alertness has caused.

Yes, we do undoubtedly need to watch out for psychopaths intent on blowing innocent people to bits. But that’s been true for decades. Whether it’s the IRA, ETA, right-wing militants or the latest crop of fundamentalists.

However, our descent into our current state of almost pathological fear will serve no purpose other than making the terrorists’ task easier.

How can Britain and America be more twitchy now than when we were getting bombed by the Japanese or Germans in World War Two? It’s completely out of proportion to the actual threat.