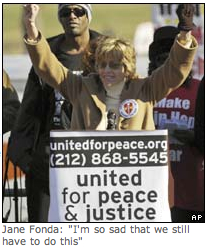 Tens of thousands of protesters have demonstrated in Washington to demand the withdrawal of US troops from Iraq.

The rally comes days before Congress is to discuss President George W Bush’s new strategy for Iraq – including the despatch of 21,500 additional troops.

Who wants the war in Iraq? Not the Iraqis. Not the millions of Britons who have marched against it. And not the 500,000+ Americans at this latest in a long series of protests.

Our “great leaders” want it. Bush, Blair, Bin Laden. The old men who send your children to die, the old men who see the lives of human beings as a cheap commodity to be frittered away in their power games.

Notice that they never lead from the front, always the rear. They’re always perfectly safe, as they keep repeating the reasons you or your loved ones have to die.

Ignore Butcher Blair’s televisual slickness, ignore whatever Fox spews about Bush. None of that bullshit matters. We know what’s going on. We know which media is in the pockets of the government and military.

And whether we’re marching in London or Washington, we know this war must be stopped.