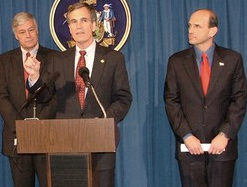 While a majority of lawmakers have simply given a whimsical thumbs-up to the potentially voyeuristic plan, the folks in Maine seem to think the invasion of privacy (not to mention the $185 million in implementation cost for the state) is downright lame. Shenna Bellows of the Maine Civil Liberties Union derided the presumably RFID-based Real IDs as “a one-stop shop for identity thieves,”
(Source: Engadget)

Whereas, in Britain we now have easily-hackable RFID passports.

Could we please start importing some politicians from Maine?