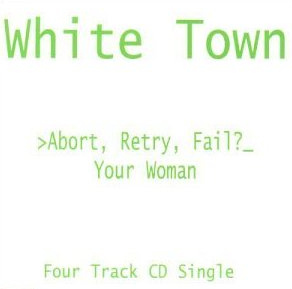 On Sunday 25th January, 1997, my song, ‘Your Woman,’ went to number one in the UK singles chart. It was soon number one in eight other countries (twice in Spain, apparently).

That song, recorded in my spare bedroom in a small semi-detached house on Silverburn Drive, Oakwood, Derby, went on to sell 400,000+ singles in the UK and a shitload in the rest of the world too. Although the album it was from, ‘Women In Technology,’ only sold 47,000 in the UK, it went on to sell 250,000+ in the USA and Canada.

Not bad for one bloke and some basic equipment:

For a while there, my life was a whirl of interviews and promo trips, airports and TV studios.

Of course, it couldn’t last.

Within a year of being signed, EMI couldn’t wait to drop me and I couldn’t wait to be dropped. I can’t work the major label way, I’ve never been a fan of art-by-committee and that’s the definition of working with a major. Everyone sticks their oar in: A&Rs who know nothing about music and less about recording start questioning mixes, MDs start choosing singles, label heads force ugly covers on you. It’s not for me. If you’re a stage-school kid or an artist who is immensely obedient and likes having a lot of money/drugs, it’s probably perfect.

It looks like I’ve been pretty lax in the decade that’s passed since then. I’ve only released two albums, a few singles and a handful of compilation tracks. But, seeing as I went barmy, bought a mansion, sold it, moved to Norwich, went even barmier, bought a studio, sold it, moved back to Derby, got a little less barmy… well, I’ve not been twiddling my thumbs.

Here would be a good place to plug my new album, ‘Don’t Mention The War.’ If you click on that linky, you can have a listen to clips of it to see if I’m still mentally unstable. I seem to have come full-circle in that I’m now back to being completely DIY. I’m very happy being my own label. Of course, if somebody waved wads of money in my face, I would be tempted since there’s a lot of useless gadgetry I want to buy. But I know that as much as I covet HD plasma screens and collecting every synth manufactured, I can’t work with major labels. (Not that they’re queuing up to work with me, mind!)

I feel immensely lucky and happy that a decade on I’m still married to the same gorgeous, silly woman, still making music and still in love with life. I didn’t go mad on cocaine, I didn’t buy a Ferrari, I didn’t go on all the crappy TV nostalgia shows that persist in emailing me. I loved having that bit of commercial success and, as much as people think I must hate it, I’m proud of having written a song that made so many millions of people both happy and slightly puzzled.

The older I get, the easier I feel with my own creativity. I love photography, DJing, I love writing on here but most of all I love being a songwriter. I know that if I hadn’t been a songwriter for the last 24 years, I would have gone even more mental. It’s truly a perfect form of deep auto-psychotherapy! And you get paid for it! 😀

I also know that if nothing had happened all those years ago, I’d still be a musician now. There’s nothing like writing a song and then sitting in front of an audience, singing it to them. That emotional connection, that shared moment is the most wondrous, beautiful feeling.