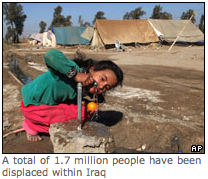 The United Nations’ refugee body has appealed for $60m (£30.8m, 45m euros) in emergency aid for those fleeing violence in Iraq.

One in eight of Iraqis have now left their homes, with up to 50,000 people leaving each month, the UNHCR said.

It said the exodus was the largest long-term movement since the displacement of the Palestinians after the creation of Israel in 1948.
(Source: BBC News)

This is Blair’s Legacy. This is what George W. Bush will be remembered for. The illegal invasion and destruction of Iraq in their pillage for its oil.

Look at that figure. One in eight.

Does that sound like a “liberated” country to you? Or one that has descended into utter chaos since our noble governments bombed the infrastructure to the ground and replaced it with an ineffectual puppet regime.

Let’s translate that to the UK: imagine 7.5 million Britons homeless, on the move and trying to find somewhere safe to shelter. Somewhere they won’t get murdered by the US military after being labelled as “insurgents” or “Islamists.”

How long will we have to wait till Bush and Blair are tried for their war crimes?