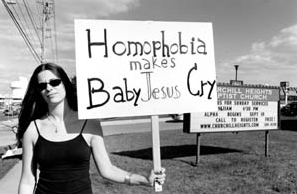 Religious groups are to stage a protest calling for a halt to laws banning discrimination against gay people in the provision of goods and services.

Christians, Jews and Muslims will take part in the rally at Parliament.
(Source: BBC News)

Isn’t it heartwarming to see this kind of inter-faith co-operation and mutual respect. If there’s one thing these religions hate more than each other and atheists, it’s GAYS!

Yep, for verily is the lord of all creation very annoyed if a boy loves a boy or a girl loves a girl. And if a boy plays with another boy’s willy – well, God’s probably going to destroy the entire city that gay lives in, killing everyone in blinding sheets of pain, including all the non-gays who live there.

BECAUSE HE IS SUCH A LOVING GOD! HE LOVES US SO! LET US PRAISE HIS LOVING MURDER OF GAYS!

The fucking nutters gathering for this anti-gay hate-in claim that having laws to stop them discriminating against gays is an infringement on their religious freedom. I have this observation:

Why do people make a special case of religion? Why can’t I claim that, as a Jyoti-ist, my belief system precludes me from paying taxes and demands that I run round naked, wanking? What if everyone was allowed their own opt-outs of the law like these homophobic twats are demanding?

Equality Act campaigner Angela Eagle MP told the Today programme: “We’re not curtailing religious freedom, people can argue against the practice of homosexuality if they must.

Awwww… now I understand! How can you be a true Jew, Muslim or Christian unless you can oppress gays? Why, it’s at the very heart of these great, moral structures! Isn’t it great that we have these ancient systems of ethics and morality to guide us in the modern world and teach us how to treat each other?

Truly, we would be lost without them! They are beacons in a sea of moral darkness!

This just in from roving reporter, Steve Lawson:

FWIW, St Luke’s is chock full of gay christians – the intolerant hate-filled nutters are as disgusting to me as they are to you, lovely J ;o)
Always nice to put the alternative view point to the homophobic, misogynist hate-ranting nutters, who somehow claim to be inspired by a hippie peace-loving homeless guy who was executed for political insurrection 2000 years ago. ;o)