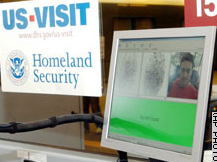 Millions of Britons who visit the United States are to have their fingerprints stored on the FBI database alongside those of criminals, in a move that has outraged civil rights groups.

The Observer has established that under new plans to combat terrorism, the US government will demand that visitors have all 10 fingers scanned when they enter the country. The information will be shared with intelligence agencies, including the FBI, with no restrictions on their international use.

Last night the British civil rights group Liberty expressed astonishment at the plan, which will affect four million British travellers to the US. ‘This must be the Keystone Cops school of border control,’ said Shami Chakrabarti, director of Liberty. ‘Accumulating the fingerprints of millions of innocent passengers will not deter would-be suicide bombers.’
(Source: The Observer)

It seems that Britain and the USA are in a race to see which country can become the better Orwellian police state. Both countries are using the real threat of terrorism to push through draconian, anti-freedom legislation that will make us the most surveilled, most fingerprinted, most oppressed peoples in history.

I bet China is watching all this very closely. It would love to have the CCTV network that Britain has or the sweeping fascistic reach of the DHS’ superior tech. Perhaps our respective governments can help the Chinese subdue their unruly population the way they’re subduing us. How about a wave of bombings? Or some kind of fundamentalist terror group?

The older I get, the more I feel that all governments, whatever alleged flavour, are inimical to human freedom and happiness.