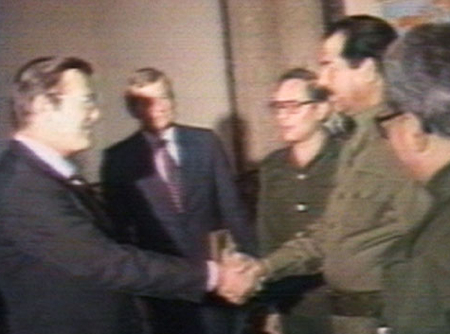 Former Iraqi President Saddam Hussein has been executed by hanging at a secure facility in northern Baghdad for crimes against humanity.
(Source: BBC News)

I’m against the death penalty. I think any society that punishes murder with murder is fundamentally illogical and flawed. Also, there is always the question of whether an innocent person is executed in error.

However, I think it’s safe to say Saddam Hussein wasn’t an innocent. He was a despot, a tyrant and a murderer. With the support of the USA and UK, he presided over a brutal regime in Iraq. As the West often does, it shored up a dictator at any cost simply so it would have an ally against a perceived enemy (in this case Iran). The West even supplied Hussein with chemical weapons to use against Iran. Only when Hussein tried to grab the Kuwaiti oil that the US wanted was he re-branded as a villain by the US government (prodded along by Margaret Thatcher).

This is also the period that the US starting caring about the Kurdish murders:

On March 16, 1988, the Kurdish town of Halabja was attacked with a mix of mustard gas and nerve agents, killing 5,000 civilians, and maiming, disfiguring, or seriously debilitating 10,000 more. The attack occurred in conjunction with the 1988 al-Anfal campaign designed to reassert central control of the mostly Kurdish population of areas of northern Iraq and defeat the Kurdish peshmerga rebel forces. The United States now maintains that Saddam ordered the attack to terrorize the Kurdish population in northern Iraq, but Saddam’s regime claimed at the time that Iran was responsible for the attack and the US supported the claim until the early 1990s.
(Source: Wikipedia)

You see, when a friend of the US or UK carries out mass-murder, that’s perfectly justifiable. Regrettable but justifiable. Friendly dictators are always welcome at the White House or Number 10. Look at Thatcher’s love for Pinochet or the US government’s love for… well, anyone who they thought useful. Only when they don’t play ball do they become evil incarnate.

So, what is the lesson of Hussein’s execution? Is it that you shouldn’t commit mass-murder? Well, since Bush and Blair have killed 655,000 Iraqis, considerably beating any of Hussein’s achievements and they walk around free, the answer has to be no.

This execution points out one truth only: fall out of favour with world powers and you will have no safety-net. No US-high-up or former Prime Minister will protect you when the families of those you tortured and murdered come calling.

I hope the death of Hussein has brought some form of closure to all the survivors and victims of his reign. But I also hope that one day the people who supported his reign of terror will be held accountable for their part in his crimes. No snow yet… but maybe soon… 😀