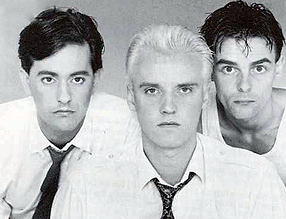 Instead of interviewing people who were actually kids then (like me) or the musicians who were making the music, they wheel on the usual list of twentysomething rentagobs who waffle on about Wham! and Flock Of Seagulls’ haircuts. Thus, the casual viewer receives a distorted, impoverished version of history. And grumpy old blokes like me are left shouting our frustrations at the telly.

Of course, all history is a negotiation, an interpretation. I’m not claiming that those who were there own some indisputable truth. We’re still subject to our own biases, slave to our own prejudices. But at least we were there, we witnessed those events first-hand. (For a more scholarly and accurate account of the Brit electropop scene, try this DVD.)

One of the bands excised from popular TV histories of ’80s music is Heaven 17. If they are included, it’s only for ‘Temptation’ which, while it’s an utterly brilliant pop song, isn’t their best. It isn’t even the poppiest!

I first heard Heaven 17 in 1981. Here’s an excerpt from an interview I recently did with Queerty.com about that time:

In the late 1970s, the Nazi right in Britain was on the rise. The major group, the National Front, even had TV political broadcasts. Asian families like mine were being petrol-bombed in their homes and the police did nothing. I remember lying awake at night, trying to listen out in case we were attacked. I was 12 or 13: a kid scared shitless.

In 1981, I heard a record by a new band called Heaven 17. It was called ‘(We Don’t Need This) Fascist Groove Thang.’ Even though it was banned by the BBC, it got to 45 in the charts – a song that was anti-racist, anti-fascist, anti-Thatcher and anti-Reagan.

What was important to me is that H17 turned out to be three white blokes. You see, if they’d been black or Indian, like me, although the song would have still been brilliant, it wouldn’t have been that surprising: you expect racial minorities to be anti-racist. But because they were white, I felt a little less isolated, a little less fearful of the white population.
(Source: Queerty.com)

(Hmmm… quoting myself feels quite… strange!) 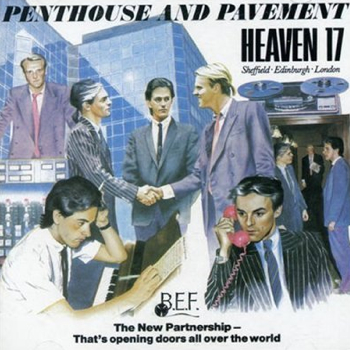 I can’t emphasise how much that one song reached out to me. When I got the album it was off, ‘Penthouse & Pavement,’ I listened to it over and over and over. I was fifteen years old. I bought all the 12″ versions of the singles and played them to death too. I even made my own C90 mixtape of them, joining the 12″ versions together by artful use of the pause and record piano keys. Six minute mixes weren’t long enough – I made one mix of ‘Play To Win’ that lasted around 15 minutes!

‘Penthouse & Pavement’ remains one of the finest albums of all time. I think for music to be good, it has to check at least one of the following boxes:

Heaven 17 checked all three of those boxes. From the start of their career up till today, they’ve been making intelligent, catchy pop. They’ve also come out with some of the most astute, well-observed political lyrics I’ve ever heard and yet they’re never mentioned in the same breath as Billy Bragg or other ’80s lefty songwriters.

It’s because they make pop music.

Rock critics have always despised the accessible, the popular. They want to be keepers of the secret flame. If Heaven 17’s music had been wilfully unlistenable, like so much “experimental” or “challenging” music, the rock critics would have been lining up to wank them off.

As it is, like Depeche Mode, they’ve never been treated with proper importance by the British music press. Here’s a band who’ve sold millions of records and pushed lyrical and sonic boundaries, a band that always tries to connect to your head as well as your heart.

‘Penthouse & Pavement’ and other classic H17 albums have recently been remastered and re-released. Any of them are well-worth listening to if you like your pop both shiny and deep. 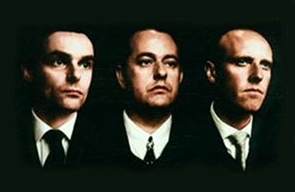 And just so this doesn’t seem as ’80s-retro as an “ironic” student party, Heaven 17 continue to record and release wild, new pop music, as you can hear for yourself by clicking here. How many other pop bands have been as consistently inventive over such a long period?

Ian Craig Marsh, Martyn Ware, Glenn Gregory, I salute you! Thank you for some of the sweetest, most scintillating pop songs in my life! 😀